Actor Sunil Shetty feels he has earned respect and maintained a clean image in his more than two decades of showbiz career because of his conduct and wants daughter Athiya to follow his path. Athiya, 22, is making her Bollywood debut with Nikhil Advani’s “Hero” opposite newcomer Sooraj, Aditya Pancholi’s son. Happy with her decision to make acting her career, Suniel, 53, said the only advice he has for Athiya is to conduct herself well in the industry. “I don’t have to tell her anything. I was worried because Athiya was always watching me. By telling them they don’t learn but by watching us they do. “In 26 years, I don’t know what I have earned but there is lot of goodwill and blessing that I have got. I have conducted myself that way I hope Athiya will do the same,” Sunil told. The “Hera Pheri” star said Athiya was passionate about acting right from her childhood. “She did plays in her school. I am glad she asked me if I would be happy with her joining films. I said, ‘I am in this industry and it is a beautiful industry. It is the most beautiful and safe place for girls. 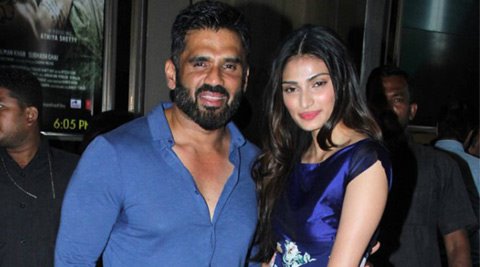 If they want to conduct themselves right, then nobody can trouble them,'” the actor said. When Sunil made his acting debut there was no one to guide him but now that Athiya is entering the industry, he and superstar Salman Khan, who is launching her, are there to help her. “I don’t regret my time. I was strong. I stood on my own… fell down. I did death defying stunts. I am happy that I am there for my children to support them,” the actor said. “Athiya has been out there so she doesn’t know much about the real world. I am happy we are there to protect, guide them and see that they don’t end up messing things for themselves,” the “Border” star said. According to him, there was never a moment when Athiya said she was not able to do her work properly. “She is extremely hard working and passionate. The only thing she told me is, ‘Dad I did so many takes today but I am not happy… Nikhil sir said it is ok but I did not like it’.” “Then she would message or call Nikhil at the night saying I am not happy with the way I did a scene. So he used to ask her to do one more take of the scene in morning. These were the only things that she told me. She never said, ‘I am tired’,” he said. Sunil has told Athiya to look at a film from a producer’s perspective. “I told her look at the film from producer’s point of view as he puts in his hard earned money… He is treated worst and if he loses at the box-office then he loses all. Make sure you are on time. “I told her to understand and read the script.. The more you said no to a script the better it is today. She enjoys and is passionate about her work,” he added. “Hero”, co-produced by Salman Khan Films and Subhas Ghai, is a remake of filmmaker’s 1983 movie with the same name.