Saif Ali Khan has been enchanting audiences with his boyish good looks and charm. The Bollywood actor has played all sorts of roles, from a lethal government agent to a goofy comedian. Saif Ali Khan is blessed with 2 children, a boy Ibrahim Ali Khan and daughter Sara Ali Khan. If rumours are to be believed, Sara Ali Khan might be soon making her entry into the world of Bollywood! According to a leading Indian daily, Saif Ali Khan’s daughter Sara Ali Khan will be starring in a Jay Shewakramani production. Jay Shewakramani is old friends with Saif and finally, the Phantom actor has decided that the time is right for his daughter to make her debut in the Indian film industry. Saif Ali Khan had earlier stated that had her daughter decided to leave Columbia University (where she was studying) he would have her shot, jokingly of course! 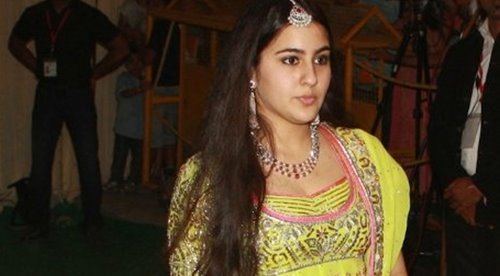 A while ago, this is what Saif Ali Khan had stated, regarding his daughter joining the Indian film industry:- “Of course, I won’t have any problem. It is a wonderful profession. But I would have a problem with her leaving the college and getting into movies. She is currently studying in her second year at Columbia University. One day, she messaged me saying she wants to join movies. It was a slightly strangely-worded message but I replied, ‘Yes, but after college.’ Then there was some silence. Obviously, she doesn’t know what she is saying. Some days, she wants to be a lawyer, someday a doctor, then one day she told me she wants to work at the White House… Nobody leaves Columbia University! Anyone in the world would give their left arm to go to an Ivy League university. I wish someone would have told her that I would have her shot if she even thinks about leaving college. This degree is your only passport — from the husband that beats you to a country that collapses economically, you can survive everything. She can get a job anywhere in the world. It would be foolish of her to leave that to act. She can do that after she completes her education. She can’t throw this to be stuck working in one profession. That is limiting yourself.”