Salman Khan likes to lend a helping hand when he can, that is, if your blood roots extend deeply into the Bollywood soil. Coming soon to a theater near you, the remake of the 1983 film, Hero, with Khan serving as producer. That is reason enough for Khan to promote the film. However, Khan has gone above and beyond. The film stars Sooraj Pancholi and Athiya Shetty, who, like Khan, are the offspring of famous actors. In an industry rife with nepotism, Khan is definitely doing his part. Salman Khan likes playing Godfather to the young actors and given the pride he felt in Bajrangi Bhaijaan, that can hardly be called a surprise. It is also par for the course where Bollywood films are concerned. An interesting article said "Bollywood dynasties rule in the Hindi film industry, where every big filmmaker intends to cast a star kid. 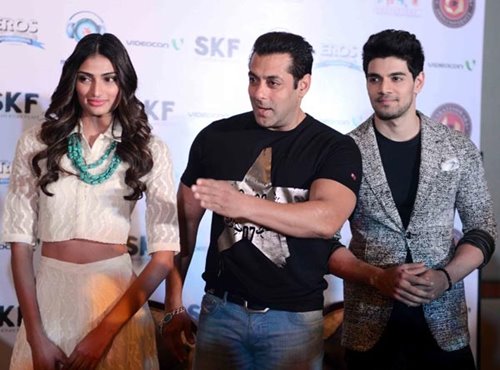 This automatically fuels up huge PR gimmicks, elevates media hype and pumps up public attention. Being the movie loving nation, the audience identify with the star-kids carrying the lineage of their parents. Thus, the anticipation over the launch of the star kids automatically increases, building up hype for the film." Boy or girl, it matters not. Uncle Salman is equally magnanimous. For Sooraj Pancholi and Athiya Shetty, Khan's work promoting them is more than just because they are children of his acquaintances. Zee News reports that Khan said, "People are saying 'I have launched them because they are my friend's kids', but there is nothing like that. I have so many friends whose kids are waiting to be launched, but these kids have talent which made me launch them. They are brilliant." Salman Khan clearly wants a bigger role than just actor and star. He is growing a legion of admirers among the younger actors and the box office receipts for his films reflect the size of that legion.