Bollywood rom-coms are about boys and girls, who fall in love, sing and sway to fun songs, and suddenly start bickering about each other’s annoying habits. They abruptly end their ‘happily ever after’ story only to be reunited again for the sake of love. It’s a standard format, and one that director Nikhil Advani claims to have tweaked cleverly for ‘Katti Batti’. Only, his trick, which comes at the very end, isn’t quite that unique, what with Hollywood filmmakers already investing in ‘Sweet November’ and ‘A Little Bit of Heaven’. Even the narrative, which shifts between the past and present, bears an uncanny resemblance to Shaad Ali’s ‘Saathiya’. His own ‘Kal Ho Na Ho’ also appears to have inspired a thread. Nikhil and writer Anshul Singhal clearly miss out points for originality and for stretching a storyline unnecessarily. Nikhil’s lovers – Maddy (short for Madhav) and Payal – are easy on the eye, and play up the rom-com clichés with zest. Unfortunately, the situations and lines aren’t funny. The guy drinks himself silly, turns sober when the flashlights turn on, fights with his besties over his love failure, sprints behind his ladylove’s car, and even runs in the middle of the road just to prove his love is sincere. 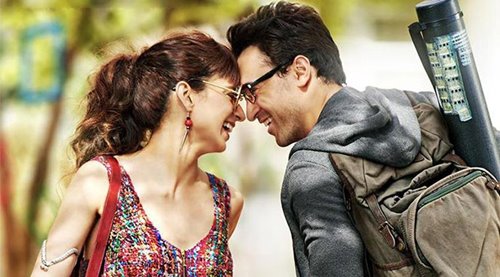 Much of the 145 minutes of screen time is pitched on his antics. With Imran Khan, that’s a gamble Nikhil went with, and one that’s not going to work in his favour. The girl sticks to the basics too. Keeps her wardrobe and hair in check while being firm and unrelenting about unfed pets and boys who ruin her little paradise for sporting legends. Kangana slips into the mould fairly effortlessly, but the script never allows her to flaunt her acting chops. She’s a seasoned performer, and manages to shine in a few scenes, but even those don’t elevate the film. Nikhil, however, manages to ace a few moments, especially, the one where the woman stands by her man in a crematorium watching a dear one slip away, and when the man sits alone in a public bus frantically redialling a mobile number that he knows has been “switched off”. At the beginning of the movie, there’s an impromptu drama that unfolds on stage to showcase the legendary Devdas’ deeply passionate romance to an older couple. But the young actors struggle to tie-in romance and humour, almost hinting the fate of ‘Katti Batti’. Let’s just say, we are katti with ‘Katti Batti’ for not living up to the build-up.