Bollywood actor Salman Khan has been robbed at a nightclub in Mumbai. The incident disturbed the actor who now believes that Mumbai "is not a safe city". According to sources, a group of girls approached Salman when he visited a nightclub in Bandra, Mumbai recently. The girls introduced themselves as the "biggest" fans of the actor. Salman, who is known for his kindness, allowed the girls to have a discussion with him. When the group left the nightclub, the actor realised that he lost his wallet, a pendant and his sun glass. 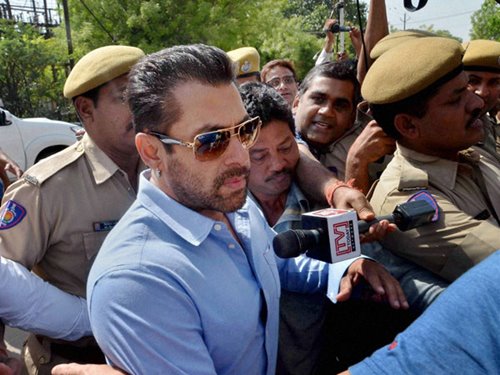 The actor reportedly had kept his sun glass, wallet and the pendant on a table when he entered the nightclub. It was suspected that the girls had taken away his belongings. Close friends of the Bollywood actor reportedly advised him to file a case against the unidentified girls. However, Salman overruled the idea. Instead, he asked his bodyguards to strengthen his security. Meanwhile, Salman Khan's sister Arpita Khan was quoted as saying, "It's not easy to rob Salman Bhaijan. He has not visited a night club in recent times nor does he carry a wallet." Salman, during a promotional event for his upcoming movie, stated that Mumbai is no longer a safe city, hence, he increased his security to 14 men.