Although Luv Ranjan’s battle-of-the-sexes comedy Pyaar Ka Punchnama (off-putting English translation: Postmortem of Love) opened to some commercial success back in 2011, it generated much the same mixed critical response that The Hangover had received two years before. Introduced to three young bucks who swore, partied and displayed the dismayed reactions to women common to many young men, plenty simply relaxed in its company. Equally, though, there were those who found the casual denigration of the fairer sex as scolds, teases and worse besides suspect in the extreme. If Pyaar Ka Punchnama 2, a more-of-the-same sequel, isn’t a Hangover II-style atrocity, it nevertheless perpetuates a similarly divisive, problematic worldview. It’s this worldview that connects PKP2 to its predecessor: in a vaguely daring conceptual coup, the original leads now play entirely new characters, though the basic game – fruitless tail-chasing – remains unchanged. Smarmy Thakur (Omkar Kapoor, an oft-shirtless cross between Captain Scarlet and Brittas Empire-era Chris Barrie) gets in a tizz about bankrolling artist flame Kusum (Ishita Sharma). Colourless Gogo (Kartik Aaryan) struggles to separate new love Chiku (Nushrat Bharucha) from her friends, female and male. And grouchy IT wonk Sid (Sunny Singh) finds himself working overtime to woo modern girl Supriya (Sonalli Sehgall) away from traditional parents who don’t consider him a suitable match. The first film won over younger audiences by synthesising elements of popular US TV series: it deployed the skittish, A-plot/B-plot structure of mainstream sitcoms within the broader framing of those reality shows that cram attractive people in well-appointed lofts without enough clothes to go round. 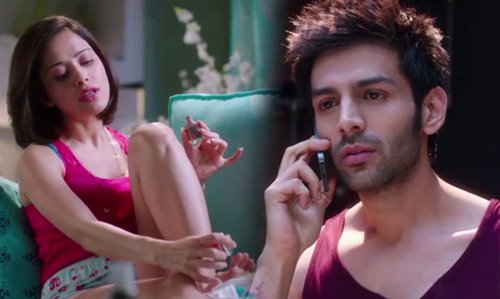 There were, and are, truthful observations in Ranjan’s writing about the niggling passive-aggressive standoffs that can occur in modern relationships – over Facebook statuses and smartphone usage – and how new additions to social circles often upset established group dynamics. Despite Aaryan’s catalogue-model anonymity, the Gogo-Chiku strand yields the strongest material here, as he flails to keep up with her party-hearty pals, and she interrupts the boys’ communal cricket-watching like a lipglossed tropical storm. The trouble – again – is that its perspective is entirely one-sided. There’s no sense of how these blustering, thrusting men might themselves be perceived as disruptive, and no attempt to understand the women’s tactics as a form of self-preservation: even Chiku, the most attentively characterised of the three, emerges as a spoilt princess whose actions are presented as first questionable, then actively hateful. The grievance extends beyond women to the very idea of relationships, and how they take us out of ourselves: in demanding such punishing hard work, such relentless second-guessing, they’re conceived of as an occupation fundamentally at odds with the film’s preferred pastimes of sport, shopping and selfie-taking. That’s a lot of resentment for a work as flimsy as this to hold in, and eventually it bubbles up to the surface. Late on, Aaryan gets an eight-minute monologue – surpassing his four-minute rant in the original – that lists in funny-tedious detail the myriad things young men find frustrating about the opposite sex: it’s the film in a nutshell, but also all too clearly untempered editorial. More succinct is the slogan on a T-shirt Thakur deigns to put on at an earlier juncture: “In the end, it’s all about sex.” During the course of this second night out, Ranjan’s series reveals its true colours: those of a genial narcissist whose superficial charm wears off very quickly. Swipe left.