The team of Hope Productions is shooting the last schedule of their movie Ki and Ka in Dubai. The romantic film directed by R.Balki, starring Kareena Kapoor Khan and Arjun Kapoor, is about two people with contrasting ideologies. While Arjun essays a progressive house husband, who lovingly supports his wife's ambitions, Kareena Kapoor Khan portrays a super ambitious career-oriented woman in the film. Ki and Ka is slated to release next year. R. Balki says, "I am ecstatic about the support extended by the Dubai film and TV commission, Emaar Group and the Palace Hotel. It's been a dream experience for us to be filming in Dubai. Thanks to the amazing support we have received from all quarters. line production support by Icon Art Production has been truly out of this world and brand support by Event Brokers has been truly heartwarming. And the whole shoot has been managed by The Social Street headed by Pamita (Seth) that has pulled off a very intricate schedule at very short notice. He added: "Overall Dubai is the dream destination for filming. With all its diverse locations, the entire emirate provides an open-air stage to film in, which any filmmaker aspires to have. 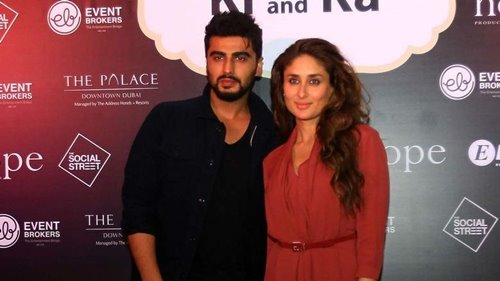 Dubai has state-of-the-art infrastructure and advanced production facilities that is found in world class cities." Pamita Seth, Managing Partner at The Social Street says, "Bollywood films are known for doing wonders for international locations and destinations. I am very grateful to HOPE Productions, R. Balki and Anil Naidu for believing in us and giving us this opportunity to organise the shoot in Dubai. It's a team effort and would not have been possible without the support extended by our partners here. All I can say is that it has been an incredible experience and thank you Dubai." Jamal Al Sharif, Chairman of Dubai Film and TV Commission and Managing Director of Dubai Studio City said: "We are very pleased to have another major Bollywood production filming in Dubai. This year has been really overwhelming for us with all the diverse large productions coming to film at the emirate. Ki and Ka is a great addition to the pool of Bollywood films we have had in Dubai, and we are happy to welcome the talent and crew to film in Dubai."