After Telugu superstar Ramcharan Teja's disastrous Bollywood debut in Zanjeer there are rumours that Ramcharan would this time do an action film co-starring his Bollywood mentor Salman Khan. Apparently Salman who sent home-cooked for Ramcharan in Mumbai during the entire time when Ram was shooting for Zanjeer has advised Ramcharan against stepping into another solo-project. "Ramcharan Teja's second Hindi film would be a 2-hero project. Salman Khan may step in to play one of the leads," informs a source close to the development. The project will happen next year. At the moment Ramcharan has said yes to two Telugu films to be directed by Surender Reddy and Gautham Menon. 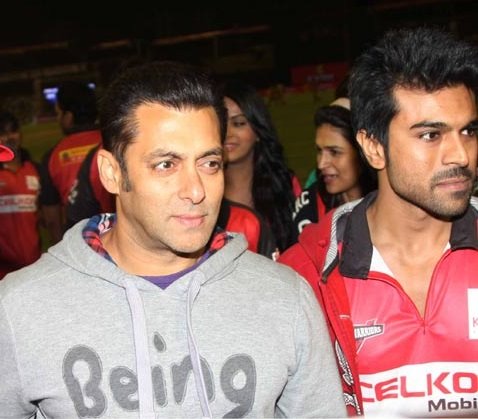 Telugu superstar Ramcharan Teja is very excited about doing the Telugu version of the Tamil super hit Thani Oruvuan where Ramcharan again plays a cop. Says the reticent law enforcer. "It's a very powerful film already done in Tamil by director Jayaram Raja. The Telugu version will be directed by Surender Reddy. I play a cop again." Ram says he feels no trepidation about getting into Khaki even after the fiasco that was his Hindi debut in Zanjeer. "I am certainly not put off by the failure of Zanjeer. In fact I'll be doing another Hindi film very soon. One experience can't put me off Bollywood for a lifetime." There was talk of Ramcharan doing Ashutosh Gowariker's historical Mohenjo Daro. The Telugu star admits there was indeed a chance of him of him being in the historical. "Yes, there were talks for that project. But that didn't work out. Very soon, I'll be doing another Hindi film," announces Ramcharan.