Bollywood loves Diwali. On-screen and off it. The week leading to Diwali always is officially the party season. It’s celebration time with friends and family. All egos and problems are cast aside as all actors and actresses gather at these parties bedecked in finery. the first of the parties kicked off last night with Akshay Kumar and Twinkle Khanna’s party. The invites sent out by the incorrigible Mrs Funnybones read: Looking forward to celebrating Diwali with you at our home. Come for a night filled with cards, crackers and a few crackpots. love and laughter. And the ones who attended swore that they got all that was promised and more. 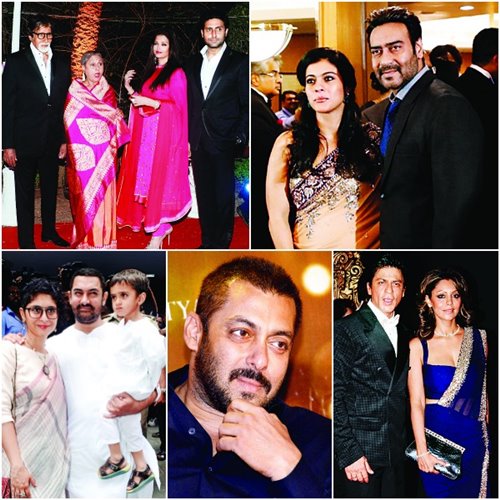 When the Bachchans call, few decline. Aishwarya Rai Bachchan has flown in from London, specially for the party. Expect to see The Khans — Shah Rukh Khan and Gauri, the Kumars — Akshay Kumar and Twinkle Khanna, the Kapoors — Anil Kapoor, Sunita and Sonam and the other Kapoors — Rishi and Neetu. Plus the Khers, the Behls and the Chopras, apart from all the people that Abhishek and Amitabh have been working with.

Double the celebration as Salman Khan’s Prem Ratan Dhan Payo will have released. The star’s sister Alvira who hosts an annual bash at her house, is in London this year. So Salman will be at home with friends who drop in.

Shah Rukh Khan will be working on Dilwale promotions during the day and is expected to attend the Bachchans party at night. We won’t be surprised if he parties the night away with Salman.

Aamir Khan is currently shooting in Haryana for Dangal where his wife Kiran is expected to join him with their baby Azad. For the last two years, he has hosted big bashes. But this year, he is working, so no party.

Saif Ali Khan and Kareena Kapoor are in town and expected to have a quiet Diwali at their Bandra home with their families, Karisma Kapoor, Soha and Kunal Kemmu.

Ajay Devgn is in Mussourie shooting for Shivaay. Wife Kajol will fly down today to join him with their two children Nysa and Yug to celebrate Diwali there.

Anil and Sunita Kapoor won’t be hosting a Diwali bash this year, but their daughters Rhea and Sonam will. The guestlist reads as the who’s who of B-Town. They will be all people under 30. And while we can’t bet on what time it will begin, we can be sure it will end with breakfast. Cousin Arjun Kapoor, who is shooting for Khatron Ki Khiladi in Beunos Aires, will not be able to make it. But Sonam’s buddy Jacqueline Fernandez will definitely be attending the do at the Kapoor’s Juhu bungalow.

Guests: Bollywood celebs to TV stars. Jeetendra’s friends like Prem Chopra, David Dhawan, Rishi and Randhir Kapoor and Rakesh Roshan to Ekta’s favourite actors from film and television. You might bump into Emraan Hashmi and Ronit Roy and Sonakshi Sinha and Huma Quereshi. Who you won’t see here? Kangana Ranaut.

Ranveer Singh, who has been shooting round the clock for his next release will spend a quiet (maybe not) family affair

Sonakshi Sinha will celebrate at home with her family.

Priyanka Chopra is shooting for Quantico in Montreal. Her celebrations will happen there.

Rani Mukerji and Aditya Chopra will celebrate Diwali at the Chopras’ bungalow in Juhu with their families and friends.

Anushka Sharma is not one for big parties. The actress will celebrate Diwali at her  home with family. Will Virat be there? Who can predict?

Ayushmann Khurrana is in Chandigarh celebrating with his family

Sidharth Malhotra has a day off from shooting (Baar Baar Dekho) and will be at home. He may be attending Ekta Kapoor and the Bachchans Diwali bashes.

John Abraham will be celebrating Diwali with his wife Priya Runchal who has come down for a short break from her studies in London.

Bipasha Basu will be celebrating Diwali with family and close friends on her terrace in Khar, which will be preceded by Lakshmi Puja. Bengali cuisine will be served during dinner.

Deepika Padukone will be promoting Tamasha with Ranbir Kapoor in Delhi

Katrina Kaif and Sidharth Malhotra, who are shooting for their next, Baar Baar Dekho, in Mumbai, are expected to attend the Bachchans’ Diwali party in the evening

Farhan Akhtar, Arjun Rampal Farhan and Shraddha Kapoor are in Shillong shooting for Rock On 2.