Bollywood's Sadhana Shivdasani passes away at 74

She had featured in two of Bollywood's most memorable scenes - in Hum Dono in 1961 and Mere Mehboob in 1963 - which even after more than half a century continue to enchant her fans around the globe. Actress Sadhana Shivdasani (popularly known as just Sadhana), passed away here on Friday morning. She was 74. BJP spokesperson Shaina NC, who was a close friend of the actress, told that the end was peaceful. "She was a dignified superstar and never got into any controversies," said Shaina, who over the past few years was helping the actress in a property dispute with leading playback singer Asha Bhosale and later with a developer. The scene in Mere Mehboob, in which a burqa-clad Sadhana, playing the role of an Aligarh Muslim University student, accidentally bumps into another student, enacted by Rajendra Kumar, has become part of Bollywood folklore. Rajendra just sees her eyes and their hands touch as he bends to pick up her books, strewn around a corridor in the famous university, where parts of the film were shot. The other memorable scene involving the actress, which made her one of the most popular stars of the 1960s, was the haunting song 'Abhi na jao chor kar,' along with Dev Anand. The evergreen song is one of the most evocative and hummable Bollywood numbers. Born in Karachi in undivided India, Sadhana's father moved the family to Bombay after the partition. His brother, Hari Shivdasani, was an actor. His daughter, Babita, also acted in a few films before marrying Randhir Kapoor. 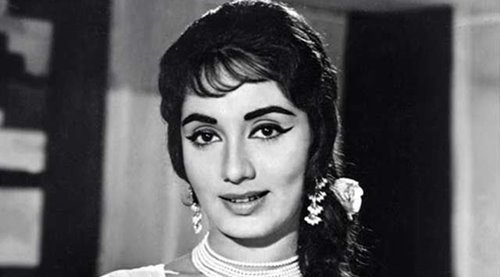 Sadhana became a style icon of the 1960s, with her trademark, Sadhana-style haircut, which became a rage in India. R.K. Nayyar, a film director - and her future husband - had cast her in Love in Simla in 1960 and introduced the 'fringe' hairstyle. Nayyar later recalled that he had seen an image of Audrey Hepburn on the cover of Time magazine in 1953, after her hit film Roman Holiday, where she had sported such a hairstyle. While her first film was Raj Kapoor's Shree 420 in 1955, when she played the role of a chorus girl at age 14, she came into prominence from 1960 onwards. Sadhana acted in several hit films including Love in Simla, Parakh, Hum Dono, Ek Musafir Ek Hasina, Asli-Naqli, Mere Mehboob, Who Kaun Thi, Waqt, Arzoo and Mera Sayaa. She continued to act in films in the 1970s. Her husband Nayyar, died in 1995 and the couple had no children. Suffering from a disorder of the eyes caused by hyperthyroidism, Sadhana became a recluse, living in the ground of a bungalow in Santa Cruz as a tenant of Asha Bhosale's. A few years ago, after the playback singer decided to redevelop the building, there were some problems between the two relating to the garden in front of the house. Later, a developer took over the structure and the dispute continued. Shaina was closely involved with Sadhana, even taking her to senior police officers to lodge her complaint.