On Sunday, a woman called Hina Shaikh filed an FIR against Bollywood actor Nawazuddin Siddiqui at the Versova Police Station in Mumbai, alleging him of physically assaulting her over a parking dispute. A news agency quoted Hina as saying, "When a person started parking in the society compound, Nawazuddin's bodyguards started opposing. As I began clicking pictures, the actor came out and physically assaulted me." Later in the day, Nawazuddin's wife Aaliya Siddiqui filed a counter FIR against Soni Dandekar, Khaleel (who apparently accompanied Hina) and a few other unidentified people citing multiple offenses. It states that Khaleel and others barged into their house when the altercation happened. According to Aaliya's complaint letter (in Marathi, a copy of which is with BT), that has been submitted to the Versova Police station, Khaleel was accompanied by a few people, including Dandekar, their society's chairman and secretary. An excerpt from the letter states, "Khaleel came looking for Nawazuddin at our house. When I asked him to wait as my husband was in the washroom, he pushed me aside by touching me inappropriately in order to get to him. When Nawaz came out, he asked Khaleel why he had forced himself into the house. He claimed that he had come earlier too, to hand over the society's notice. But as the actor wasn't present, he had to come again. When Nawaz asked Khaleel, why he had misbehaved with me, he threatened, 'I can do whatever I want to. I'll go to the media and show you my power.' Then, they called the cops. 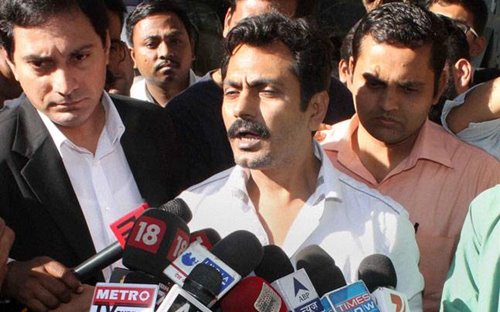 "Aaliya's FIR has been filed under sections 143 (Punishment), 147 (Punishment for rioting), 149 (offence committed in prosecution of common object), 354 (Assault or criminal force to woman with intent to outrage her modesty), 452 (House-trespass after preparation for hurt, assault or wrongful restraint) and 506 (Punishment for criminal intimidation) of the Indian Penal Code (IPC). Nawazuddin's brother Shamas, who was present along with Aaliya at the police station, says, "Parking was just an excuse. There is adequate space in the society for parking. This is their way of getting back at us. We, along with 19 other members of the society, had submitted a letter to the Registrar of Co-operative Housing Societies asking them to conduct an election for the post of society chairman and secretary. Dandekar is incompetent, uncooperative and corrupt. Hina doesn't even reside in the society. Dandekar considers her as her granddaughter. Nawaz has been targeted because he is a celebrity. I have a video recording of the incident as evidence. In the past, they have even removed the CCTV cameras that we had installed around our house. Even the society watchman has denied their allegations of Nawaz assaulting Hina." Assistant Commissioner of Police, DN Nagar Division, Arun Chavan said, "Since these are cross cases, we will verify the facts first and Nawazuddin will be summoned to the police station if required. There have been no arrests yet." We tried to contact the actor. At the time of going to press, he was yet to release an official statement.