Bigg Boss goes international now, in Kuwait. Ha! Excuse my really bad analogy but Airlift did feel like a long season of Bigg Boss where contestants were packed in a school in Kuwait, with a variety of characters; from a snarky uncle to young budding romances to even an International Kuwaiti contestant who can’t speak in Hindi. There was frustration, shortage of both hope and food that qualified it to be the best season of Bigg Boss ever. Airlift is about the largest civil air evacuation, airlifting over 170,000 Indians stranded in Kuwait during the Gulf War. Ranjit Katyal (Akshay Kumar), a multi-billionaire in Kuwait decides to help all his employees and other Indians stranded in Kuwait. He shelters them all in a camp set up in a school in Kuwait, arranges for food and pulls all his political connections to migrate over 170,000 Indians back to their homeland. The feat seemed so impossible that every time the cynic critic in me wanted to puncture holes in the impossibility of the plot, a voice within me reminded me that it was based on a true story hence I believed all that I watched; including the fact that the airline involved in the airlift was Air India. What I particularly liked in the movie was its detailing. Shot in the UAE, they have successfully managed to recreate the world of 1990. There are old cars, old black phones that scream tring tring to even the newsreader on TV with a flower in her hair, a happy reminder of Salma Sultan. There is also a reference to Sachin Tendulkar, a new boy, being slammed by the media for his performance. Even the game of Chidiya Udd that Ranjit and his daughter play towards the end is also so 1990s. 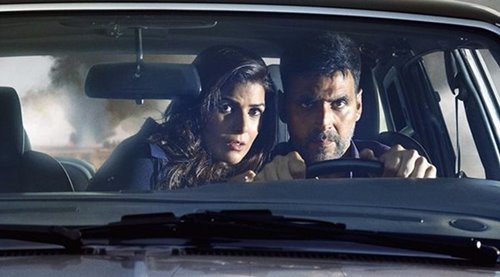 Akshay Kumar redeems himself after that hellish no brainer Blah-Bling!! He is cast well. He lends that sense of dependability that the character of Ranjit demands; a man who would take the responsibility of so many people. Akshay does struggle with his lines yet manages to make it all believable. His change of character from a shrewd mean businessman to this messiah of masses seems a bit out of place though. Nimrat Kaur is immensely sincere in reprimanding Mr. George in that exact one powerful scene she gets in the movie. Even the supporting cast is impressive. Prakash Belawadi as an old, critical man irritates you so badly that you want to slap him and leave him in the desert. And that is a compliment to the actor. Inaamul Haq breaks his hibernation of almost two years after Filmistaan and delivers a fine performance as the Iraqi Major. He has a cute accent in the movie. Kumudh Mishra as the kohl-eyed Kohli in the movie is the real hero, fighting a far bigger battle in Delhi against the apathy and red tapism of Indian bureaucracy. The film reminds you of how lifestyles have changed with time. Imagine such a situation would now have a parallel world on social media with people posting pictures from the camp, with some strange updates from, "food sucks at the camp", to, "my boss is so hot", to even check-in updates at the Apex International School at a camp. Airlift, on one hand, is very real but at times fails to keep the audience on the edge of their seats that one would expect from a rescue thriller. Raja Krishna Menon manages to build tension but not enough to pause you from stuffing your face with that bag of popcorn. And then the need to insert those songs in between that robs a thriller from its pace and impact. Despite that it makes for a great weekend watch.