Except for a few scenes, Katrina Kaif-Aditya Roy Kapur-starrer Fitoor comes across as a rather superficial affair and a disappointing adaptation of Charles Dickens’ Great Expectations. For one, there is over-dramatisation of situations. The screenplay flags and fails to engage the audience despite heart-breaking performances by Aditya and Tabu. Noor (Aditya Roy Kapur) loves Firdaus (Katrina Kaif) but has never been able to quite express himself. He meets the lady after years and discovers that the intensity of his feelings have not reduced and she plays along. What would you expect a Bollywood hero to do? Confess love and deliver some high-octane dramatic dialogues? That’s not what you get in Abhishek Kapoor’s Fitoor. Our protagonist Noor, looks at his ladylove with such intensity, is nervous around her in a cute way and acts much like a teenager around his crush. Relatable much? Aditya plays Pip’s character from the novel, an aspiring artist Noor, while Tabu plays the Indian version of Miss Havisham - Begum Hazrat. Katrina Kaif steps in as the frosty Estella, called Firdaus in the Bollywood adaptation. Since Fitoor is set in Kashmir, the state provides a beautiful canvas on which the story can be painted. Cinematographer Anay Goswami deserves credit for capturing Kashmir’s gorgeous exquisiteness in all its details -- the white snow-covered mountains, red chinar leaves and the grey of winters. Amit Trivedi’s soulful music enamours us, surrounded as we are with so much surreal beauty. However, Fitoor falls short of fulfilling any other great expectations we had beyond showcasing the wonderful beauty of the Valley. 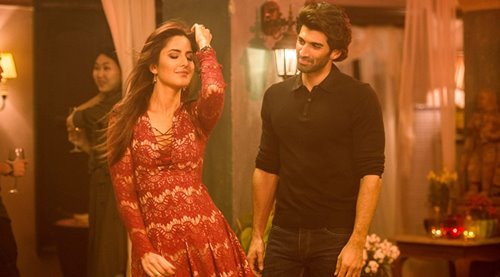 Aditya and Tabu are undoubtedly the best bets in Fitoor. While you are likely to fall in love with Noor (Aditya), pity and hate is what Tabu’s Begum Hazrat evokes. You detest Noor for his stupidity but his haunting looks and hopeless-yet-passionate love makes your heart melt. He does not express his love for Firdaus, except for one scene where he is drunk. However, each frame involving the lead pair is laden with romance and his intense, lovelorn facial expressions lend much weight. The romantic scenes remain so till the time the focus is on Aditya but you lose interest the moment the camera shifts to Katrina. Not just because her character is least interested in Aditya, but because her dialogues sound fake and Katrina’s one-dimensional acting fails to bring across the passion even in the most intimate of scenes. Tabu plays the eccentric and conniving Begum Hazrat, who was wronged in love and has taken upon herself to ensure the menfolk experience the exact heartbreak and pain she did. Tabu brings in dramatic energy and a sense of gravitas to Fitoor. Watch out for one of the last sequences where Noor confronts her and Tabu’s dramatic Begum gives her best. Ajay Devgn plays Abel Magwitch and delivers an impressive performance in his short role in the film. Aditi Rao Hydari, who plays younger Begum Hazrat, is beautiful and looks pretty much a younger Tabu. However, actors like Rahul Bhat, Lara Dutta and Govind Namdev, are wasted in small roles and only add to the over-dramatic fest on display. The ending makes for yet another dampener in the entire journey - throughout the film, Firdaus clearly has little or no feelings for Noor, the cruel Estella that she is supposed to be. In the end, she runs back to him not because she loves him but because she’s in love with the idea of love!