Whenever we think of Kung Fu, names like Bruce Lee and Jackie Chan pop up but associating Bollywood with these action heroes will throw you into a tizzy. Enjoy the tizzyness the international martial artist will be trying his hands at something that will definitely make you anxious for his next film - 'Kung Fu Yoga'! The film has a special number dedicated to his Indian fans, which is set to be choreographed by none other than Farah Khan. The ace-choreographer turned director has had all the tinsel town biggies dance to her tunes and now Chan is to attend her classes. This new collaboration is super exciting given the fact that many international artists and makers are diversifying their approach by joining hands with Bollywood actors, producers and the crew. 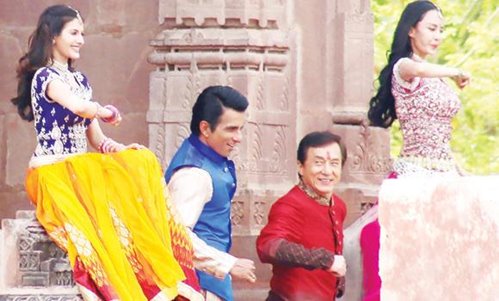 So Khan shared a picture while she was on her way to Jodhpur and now a picture posted by her has the man himself, Jackie Chan! They are looking utterly cute. The 'Rush Hour' series actor is seen donning Indian attire with a huge tikka on his forehead, while a relaxed Khan is seen wearing a printed top with patialas. "The King of action can dance and how? Changing his name to Jackie Jackson #kungfuyoga," she captions the picture perfect frame. The special Bollywood song in Chan's Indo-Chinese production also stars actor and model Sonu Sood and actress Amyra Dastur, which will be shot on palatial sets in Rajasthan and thereafter Beijing. The film is directed by Stanley Ton and is slated to release this October.