Priyanka Chopra may be flying high in Hollywood but the actress is also a strong emotional and physical support to her cousin Meera Chopra back in Bollywood. “Priyanka is a great emotional and physical support for me in the industry. She has said, ‘whatever happens, I am always there’. This industry can be very scary for a newcomer but if you have someone like her, who will take care of you, it is a huge support,” said Meera. “Because of her I take a lot of liberties which a newcomer might not take because I know at the end of the day somebody is there to take care of it,” she added. Meera made her Bollywood debut with Gang of Ghosts and will be next seen in 1920 London, a horror film opposite Sharman Joshi. The actress, who has worked in many South Indian films, did not take any acting advice from Priyanka but was touched when the Bajirao Mastani star called her and said she was proud of her. 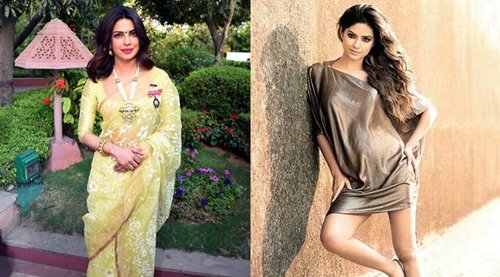 “Priyanka saw the trailer of 1920 London and said, this is the first Hindi film trailer she found really scary. She said she is really proud of me. Priyanka has always told me don’t do something I will not be proud of. I wish she was here, I could show her the movie.” Directed by Tinu Suresh Desai, 1920 London is the third instalment in the 1920 horror franchise. It is slated to release on May 6. On being quizzed that Meera can star with Priyanka and her other cousin, Parineeti Chopra, in a film, the actress quipped that Priyanka will not come to India for the next two years. “I think that is very difficult because Priyanka won’t even come to India for the next two years. Honestly, I feel she will be very successful in Hollywood because I know how she is. She is very aggressive in her work and confident. In the next two years she will be conquering Hollywood.” Priyanaka is currently shooting in Los Angeles for her Hollywood film Baywatch and was recently in India to receive Padma Shri award.