Tiger Shroff and the journey of Bollywood's action hero

Bollywood has come of age and so have its heroes. From the time when film-makers would compromise on pot bellies for crisp dialogue delivery to one where six-packs are an unspoken prerequisite for male leads, we have seen it all. Be it the Guru Dutts or the Rajesh Khannas, the overall demeanour of the average hero used to represent maturity more than youthfulness. This made their physique, not looks, a lesser concern for the average audience and, in turn, for the directors. Ironically, the trend also seeped into a more specific Bollywood lead role such as its very own action hero. Dharmendra, who in many ways is considered the first action hero of Bollywood, was never fit as per our modern standards and neither was Amitabh Bachchan. Yet, both managed to scare the hell out of bad guys and instil a sense of security among the audience with their powerful screen presence. However, action hero was not a specialisation in Bollywood until the late 1980s when Askhay Kumar made it count. This Punjabi boy, who is formally trained in martial arts, turned into a mean machine that Bollywood had never imagined. The height of his flying kick, the swiftness of his butterfly and his flexibility in general made physique a part of the Bollywood’s X factor for the first time. Although Salman Khan had also begun to hit the gym in those years but his muscles were and in many cases still are, only restricted to taking his shirt off. Remember Oh Oo Jane Jana? 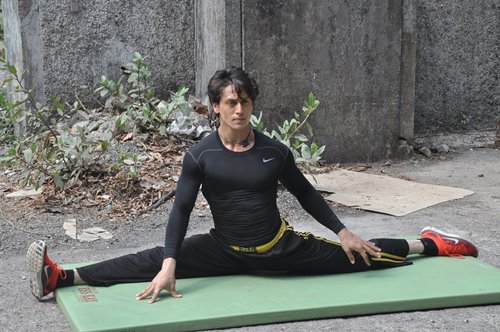 Akshay, on the other hand, was catering to a niche of both film-makers and audiences. Much like Jean-Claude Van Damme, he made writers pen scripts that utilised his body as a dynamic prop and his ability to fight. Akshay became to action what Shah Rukh Khan was to romance. Shah Rukh, however, was not the first romantic hero, while Akshay clearly was Bollywood’s first true action hero. Despite his Khiladi legacy, Dhadkan happened to Akshay and the love triangle featuring another mainstream action hero, Suniel Shetty, actually worked both commercially and critically. So began a new chapter in Akshay’s life and ended an old one in Bollywood’s history. No one had the capability to fill in Akshay’s shoes, save for special effects, until Tiger Shroff surfaced as his successor. The Shroff scion was introduced to the world with Heropanti and with Baaghi, he has cemented an identity of his own in B-town.

Keeping the conventionality and ridiculousness of the film aside, the film that also stars Shraddha Kapoor provides an actor such as Tiger just the right story and environment to show the Chulbul Pandays, the Singhams and even the Rowdy Rathores that action can still be done the old-school way. More than that, Baaghi reflects that Tiger is clearly striving for a unique identity; one that is distinguishable from the likes of Ranveer Singh, Arjun Kapoor and Varun Dhawan. It is very easy to be a good dancer and have the looks that make girls swoon, but it is difficult to stand out amongst a league of clones. Having said that, one key factor that makes Tiger different from the classic action hero stereotype is the lack of that macho man element in him. He does try to compensate for it by adding fury to his acting skills but his looks come in the way. Are Bollywood audiences willing to accept this new avatar of an action hero? One cannot say for sure. But it’s safe to say that Tiger indeed has the potential to shape a distinct future for himself. All he needs to do is stay focused, like Akshay did for an entire decade, or else drift into the league of Bollywood’s many boys who today try too hard to act like men.