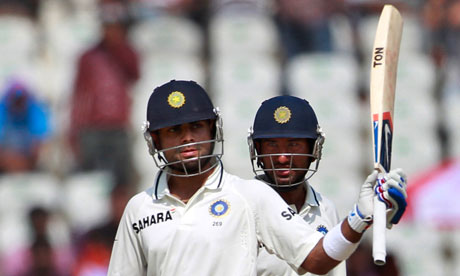 Cheteshwar Pujara's unbeaten century put India in a strong position as home side recovered from the loss of their star batsmen to reach 307 for five at the close of the first day in the first Test against New Zealand in Hyderabad. Pujara's maiden Test century was a patient affair, coming in 169 balls as Gautam Gambhir, Virender Sehwag and Sachin Tendulkar all fell. His unbeaten close-of-play score of 119 included a total of 15 fours and one six.

Pujara found a valuable ally in Virat Kohli until the latter was caught by Martin Guptill off Chris Martin for 58 after a fourth-wicket stand of 125 had taken the home side to 250. Pujara then teamed up with the captain Mahendra Singh Dhoni, and his unbeaten 29 from 37 balls took India past 300 without further loss.

The composed performance of Pujara contrasted with the hurried innings of opener Sehwag, who fell three runs shy of his half-century in the morning session with a rapid 47 off 41 balls. Sehwag lived dangerously throughout, having been dropped early on and then seeing another dangerous shot race through the slips, but his luck caught up with him in the 15th over.

He could have few complaints, however, with a poor shot comfortably held by Martin Guptill at second slip off Doug Bracewell. Only two overs earlier, he had received the second of his two let-offs, with a shot off Bracewell splitting the slips as Kruger van Wyk and Ross Taylor were left looking at each other. In the ninth over, when on 23, he had been dropped by Daniel Flynn when offering a difficult chance at square leg off Chris Martin. Gambhir had been the first to go, caught behind off Trent Boult after making 22.

Following their departures, the run rate slowed but India made good progress despite the loss of Tendulkar early in the afternoon session for 19, undone by a fine Boult delivery that nipped back in to strike the middle stump. Pujara and Kohli then put India on course for a healthy first-innings total, and when the latter was dismissed, Dhoni came in to help steer the home side to the close and the prospect of a big score on the second day. India are hoping for a successful series before England arrive in November for a two-month tour.