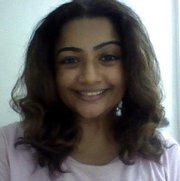 Annupamaa Krishnaswami ( born 2 September 1967 as Anupama) is an Indian playback singer from Tamil Nadu. She is known especially for the song Chandralekha (Konjam Nilavu) from Thiruda Thiruda. She is known for her special type of voice that suits all types of electronic songs.

Annupamaa was born in Chennai, Tamil Nadu, India on 2 September 1967. She got training in Carnatic music from the age of 4 and she began singing in school competitions from the age of 8. She had her school education from St. Anthony's Senior Secondary School, New Delhi and took her BA Degree in English from Kamala Nehru College, New Delhi in 1989. She dropped out of the Mass Communication Course from the prestigious Indian Institute of Mass Communication in New Delhi following her passion to become a singer. Anupama is married to J. Murali Krishnaswami, Creative Director of R. K. Swamy BBDO and they live in an apartment in Mumbai.

Annupamaa used to take part in college competitions during her days as a student of Mass Communications. As a copy trainee in an ad agency, she had a chance to participate in an Ad Utsav.Annupamaa made herself a successful ad jingle composer and singer in the early nineties itself. She has been a part of many successful ad jingles by music maestro A. R. Rahman, who was then A. S. Dilip Kumar. The list of her most successful ads include ads for Ponds Dreamflower Talc and Soap, Medimix soap, Tatia Resorts, Diplomat Whisky, AVT Deepika Coconut Oil, Trupti range of products and Aavin Goodness ice cream.

Rahman made her sing July Maddham Vanthal from Pudhiya Mugam in 1993, which became a hit. But the break in her career came through the song Chandralekha from Thiruda Thiruda which had music set by A. R. Rahman himself. This song is even now regarded as one of the best techno-electronic song ever. Her passionate singing won her several accolades and she was even nicknamed as Chandralekha Anupama. After the success of Chandralekha, she became one of the most sought after singers in Tamil Nadu. However, she remained selective and sang the songs, which she believed extra-ordinary. In 1994, she got another big hit through Halla Gulla from Bombay. She had to wait for 2 years to get yet another career break, which came through the song Mercury Pookkal from Ratchagan.

Though this song was not received well as Chandralekha, it too won her and Rahman, several accolades. She was an additional vocalist in the 1998 hit song Dil Se Re from Dil Se and 2003 hit song Break The Rules (Maro Maro) from Boys. She got a Star Screen Award for Best Female Playback nomination for her soulful singing in the song Yeh Raat from Aks. Her latest hit songs include two tracks from the musical film Jaane Tu... Ya Jaane Na, Pappu Cant't Dance and Nazrein Milaana. She is the captain of the reality show Sangeeta Mahayuddham, telecasted on Sun TV from June 26 onwards.

She has now sung in all the South Indian languages, Hindi and English. She has also recorded a French ditty for a Malayalam film. "It's all due to my knowledge of Sanskrit which makes it a cakewalk to sing in any lingo", she says. In the last few years, she has been learning piano and has completed 6th grade from Trinity College of Music. She is now busy with her own debut studio album. She says, "It will be out some time next year. The lyrics are being penned by a very good poet. They will be full of beautiful imagery, a mix of poetry and peppy English words." After that album she is planning a promo tour of South East Asia – Jakarta, Indonesia and Malaysia.