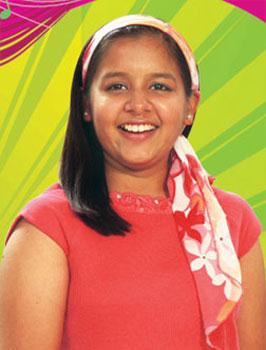 Aishwarya Majmudar was born in (October 5, 1993) is a singer from Ahmedabad, India. She got huge recognition after winning the 2008 musical reality show Amul STAR Voice of India of STAR TV at a young age of 15. She got highly praised for her performances by all judges with Sartaj Sarvottam and Super Sartaj Sarvottam throughout the show.

Pritam said once that "She has gotten a fresh melodious voice and when I hear that, the music director within me jumps out". Shreya Ghoshal called her "Princess of her heart" and also said in one episode that she has become a huge fan of Aishwarya. Kunal Ganjawala was also very impressed with her confidence and expressive singing and said "I have never seen such talent, they are not kids but very mature". She stunned all celebrity guests came to the show with her versatile and ready-to-playback singing.

She bagged "Chhote Ustaad" award from Amitabh Bachchan after a very tough competition with Anwesha Datta Gupta.Aishwarya impressed the jury members and the viewers through her power-pack performances, and got the highest votes throughout the show. She also took part in Music Ka Maha Muqabala in Himesh Reshamiya's "Himesh's Warriors" team. She gave memorable performances there in front of renowned musicians as well. Unfortunately, she wasn't given much performances by Himesh. She has sung many Gujarati songs and recently recorded bollywood songs for four hindi movies.

Aishwarya has taken education at Delhi Public School, Ahmedabad. After completing 10th grade, she is taking education from National University of Open Schooling. Her dream is to become a playback singer in music industry.

Aishwarya started her vocal training in Hindustani classical music from Smt Monika Shah at the age of three. She has inherited the talent from her parents who also are adept at singing. She started learning singing technicalities from Shree Purushottam Upadhyayaji and Shree Aniket Khandekarji as she grew up.

She took part in Zee Saregamapa aged seven where she got praised by Usha Mangeshkar after her performance on "Kuhu Kuhu Bole Koyaliya" and commented that we know your future now. Before entering Chhote Ustaad competition, she was already recognized for her talent by Gujarati music industry. Aishwarya delivered her first solo concert at Nagpur at the age of 11 and has performed several solo concerts across India and abroad including Eastern African Countries, USA and Europe.

She recorded her first playback for a Gujarati movie "Ghar maru mandir" in February 2003. She recorded a theme song "Asmani rang hoon" for Hindi TV Serial Dill Mill Gayye in 2008. Her first bollywood playback released in July 2011 in the movie Hari Puttar: A Comedy of Terrors.She has already recorded for four hindi movies.

Aishwarya bagged "Chhote Ustaad" awarded by Amitabh Bachchan on 5 April 2008 on winning Amul Star Voice of India contest. She has awarded with prestigious "Shahu Modak Award" in 2006, "Power-100" in 2008 and "Sangeet Ratna" in 2009. She was felicitated at Chamber of Commerce & Industry, Gujarat or her achievements on "International Girl Child Day" in 2009. Also felicitated by FIA (Federal of Indian Association), USA in New Jersey at TV Asia in 2008. Aishwarya was invited by New York's Indian community to sing American National Anthem followed by Indian National Anthem for India Day Parade of 16 August 2009. She bagged the distinction of becoming the youngest solo performer to evoke such a response. 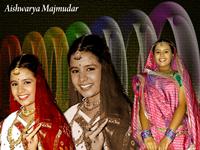 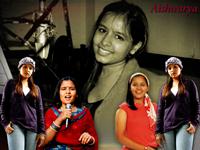