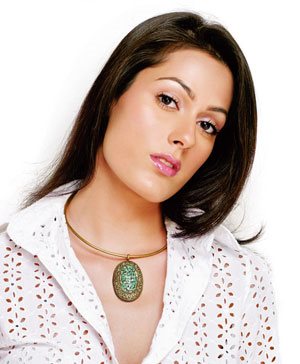 Amrit Maghera is an Indian - English model, Actor, Singer and a Dancer from the United Kingdom. She has had formal acting training in London and has a first class degree in Drama and Dance. She has trained professionally in many different styles of dance from a very young age such as Ballet, Tap, Jazz, Contemporary, Bollywood and Hip Hop.

Lately, Amrit has got the recognition in India and Bollywood as she was involved with Lakme as its brand ambassador. Her association with India’s leading cosmetic industry gave her the chance to enter the B Town. After getting a break with Bollywood, she was seen acting with all the actors of B Town, including the hot hunk Arjun Rampal and Mr. Perfectionist – Aamir Khan as supporting actress in different movies. Apart from being linked with Lakme, she also got the chance to do commercial ads for a number of cosmetic brands like L’Oreal, Satya Paul, Miss Sixty, Sketchers, Olay and Nokia. Besides, she has been often on the cover page of different magazines including Harper’s Bazaar, GQ, Vogue, FHM, Verve, Femina and Maxim.

As far as her education is concerned Amrit Maghera did a number of diplomas and certificate courses on acting, dancing and literature. She did her acting course from The Barry John Acting Studio in Mumbai apart from doing the same from London at the institute called The Actors Temple. She has been trained in commercial dance when she was barely five years old. Her versatile look, wide array of skill sets and good Hindi and English skills have given her good roles in both English and Hindi movies. She has been known in the industry as one of the most versatile actress, who is skilled, determined and professional enough to defy any challenge coming in her way. Her forthcoming movie is Mad About Dance, which is likely to be released on 22nd of August.