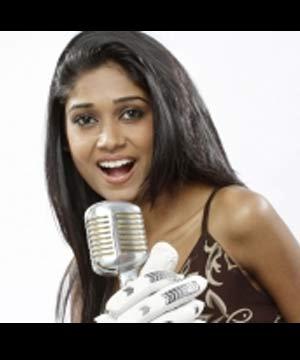 Antara Mitra (born July 10, 1987 in West Bengal, India) is a vocalist and Bollywood Playback singer who was a contestant in Sony Entertainment Television's reality show Indian Idol 2 in 2006.

Antara Mitra is from Maslandapur, a small town in West Bengal, near Calcutta, India. She exhibited a keen early interest in music, and her father inspired her. She was accepted as a contestant at age 18 on a national TV show and competed admirably as a finalist in both that show and a successive similar show (Junoon). At one time she considered studying medicine, but abandoned the idea in favour of pursuing a professional singing career.

Mitra literally grew up with music: her father is a music teacher. Since the age of three, Antara would sing along with other children who came to her home in order to learn from her father. When Antara was eliminated from the contest, well-known music director Anu Malik offered her playback singing work, but Antara returned to her home town and soon afterward (April 2006) she relocated to Mumbai to pursue a vocal-performance-for-film soundtrack career.

She also participated as part of the Bollywood team of vocalist contestants in another popular Indian TV reality show, the Junoon (TV series) "Kuchh Kar Dikhaane Ka" where again she was not top winner, however she considers both shows learning and career-development experiences, and expressed gratitude to the TV audience, producers and judges of both contests for allowing her opportunities to perform for the broadcast audience and judges while competing. She sings in multiple languages: Hindi, Urdu, Bengali, and English and is active in the Bollywood film soundtrack music industry.

Piano Round: In the Piano Round, the first round when audience (TV-viewer) voting was invited, she sang the title song "Rangeela Re" (from the film Rangeela). Anu Malik remarked with a smile, "I think I have found my Playback Singer!"

Indian Idol 1 champion Abhijeet said, 'Itna aacha performance hai ki mumbai walle bhi itna aacha nahi kar sakte. Itna aacha gaya...' Farah Khan said, '[I think Antara is an] outstanding performer...' although Khan felt Mitra had slightly overperformed. Sonu Nigam said, "You can sing any kind of song beautifully, as well as you sing classical (Hindi songs). So the only word I can use for you is SUPERB!" On the following Indian Idol 2 episode, it was announced that Antara had bagged the most SMS (cell phone text message) votes.

Gala Rounds: Antara sang the song "Ruki Ruki Thi Zindagi." She got decent comments, Anu Malik telling her that she should not worry, because she will move to the next round "for sure." Farah Khan said her performance was that of an international superstar and that Antara looked like an "international superstar". Sonu told her to not move around as much, but said that it was very good.

In the second gala she sang "Tu Ruta To," and she got a few positive comments, however Sonu Nigam felt she did have more to offer. Tabu said Antara's makeover has been phenomenal and that she should keep up the good singing. Next gala, she sang "Tere Bina," and all the judges gave her good comments. Anu found no fault in her singing. He said he is proud of her, "especially today; this is a proud movement for me when I say that you are my playback singer." Farah and Sonu complimented her for a perfect performance. The two also had a few words of caution on the pronunciation of words. Actress Priyanka said, "She will create magic with her voice!!" and was impressed by the youthful quality of Antara's voice—adding that she has a great future in playback singing. Actress Kareena complimented, "Your voice is absolutely stunning, and I like what you're wearing today, too," referring to her bright red saree.

It was Antara's performances of "Zara Zara" and "Morani Baga" with which the judges were most impressed. For "Zara Zara" from Rehna hai tere dil mein, Sonu Nigam was very happy to see that Antara had taken his advice. 'Where was this side of you all these weeks? Fantastic singing, superb singing.' Anu Malik – 'tumhari singing ne jadoo bataya, kissi ko banaya aur kissi ko mitaya.' Farah Khan – 'Mind blowing singing & performance, it's your best performance `til date.' Amisha told Antara that "if there were rose buds on the sets, they would have bloomed".

In Next Gala she sang "Morni baga ma" from Lamhe. Anu praised her singing from all quarters. After hearing her, Farah seemed "proud that she was one of the panel that discovered such a talented singer" like Antara "from a small town in India." Sonu said, "I'm so proud of you, because you're very very very good." Actress Preity Zinta said, "Kiyunki aapne bohot bohot bohot achcha gaaya." Preity also said she wishes that some day Antara would perform a playback (lip sync) track for her. Anu Malik supported that comment by reiterating that yes, "100% she is [in his mind] my playback singer.

Antara's next performance, of "Bairi Piya" was also appreciated by most of the judges. Anu Malik was satisfied with her performance of this song. "You sang it so well," he said. Sonu Nigam said he felt that she had only put in an 80% effort. "Your specialty is that you can sing all types of songs, but today I feel that you could have done better, even though you have put up a good show," said Nigam. Farah said, "You sang so well, and I think I should disagree with Anuji, as the next Indian idol will be a girl." Farah also complimented Antara's looks, saying she could not only be the next Indian Idol, but also the next Miss India. Karan Johar said Antara's performance was "a perfect gift to Sanjay Leela Bhansali, as it was his birthday" He added, "I really felt so good, aapka antara bhi n aapka mukhra bhi utna hi sundar hai." Antara's parents had come to the studio to surprise her and to watch her perform for the first time—this led to a tearful on-camera family reunion, especially between mother and daughter. In the Results episode that followed, it was declared that, for the first time, Antara was in the bottom three, in danger of leaving the competition. She was with N. C. Karunya and Meenal Jain there, and with Meenal in the bottom two. However, she made it to the final five, as Meenal was eliminated.

The following week, Antara was the only female remaining. She sang "Mere Haathon," for which she received negative comments. Antara said, "Being the only girl left in the race now, I quite fear a vote out." Sandeep Acharya (the eventual winner) and Antara were in the bottom two, and receiving the lowest number of SMS votes, she left, leaving 4 males in the competition. Antara got loud cheers of applause from the live audience and the hosts of the show, Aman Verma and Mini Mathur when she said that she didn’t want votes on the pretext that she was the only female contestant remaining on the show. Antara said, "This stage has given me so much: glamour, recognition... I am upset about being voted out, but I am quite content with the Indian Idol stage! For out of Indian Idol... I am not merely going back to my village, I am going to remain on here in Mumbai and make my name in the music industry."

Antara Mitra was the last female standing and competed to reach the Top Five contestants on a national TV contest show. She had the most impressive record of not being "in danger" on the Indian idol 2 TV series: she was only in danger once. Also, in the galas, she received the most audience votes three times; for her performances of "Ruki Ruki Thi Zindagi," "Zara Zara," and "Morani Baga." 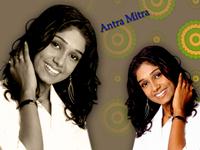 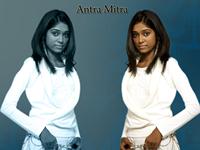