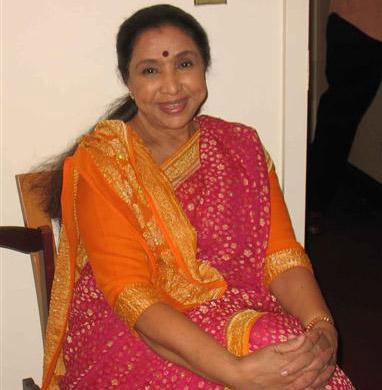 Asha Bhosle was born in the small hamlet of Goar in Sangli, Bombay Presidency (now in Maharashtra), into the musical family of Master Deenanath Mangeshkar, who belongs to Gomantak Maratha Samaj. Her father was a theater actor and classical singer. When she was nine years old, her father died. The family moved from Pune to Kolhapur and then to Mumbai. She and her elder sister Lata Mangeshkar began singing and acting in films to support their family. She sang her first film song Chala Chala Nav Bala for the Marathi movie Majha Bal (1943). The music for the film was composed by Datta Dawjekar. She made her Hindi film debut when she sang the song Saawan Aaya for Hansraj Behl's Chunariya (1948).Her first solo Hindi film song was for the movie Raat Ki Raani (1949).
At the age of 16, she eloped with 31-year-old Ganpatrao Bhosle, marrying him against her family's wishes. Ganpatrao was Lata's personal secretary. The marriage failed miserably. Her husband and in-laws mistreated her. After a few years of marriage, Asha was turned out (around 1960) by a suspicious Ganpatrao[and she went to her maternal home with two children and pregnant with her third child. She continued to sing in films to earn money.
At that time, prominent playback singers like Geeta Dutt, Shamshad Begum and Lata Mangeshkar monopolized the singing for the female lead and the big films, whilst Asha used to get the assignments they refused: singing for the bad girls and vamps, or songs in the second-grade movies. In the 1950s, she sang more songs than most playback singers in Bollywood (not counting Lata). Most of these were in low budget B or C-grade films. Her earliest songs were composed by A R Qureshi, Sajjad Hussain and Ghulam Mohammed, most of which failed to do well.[13] Singing in Dilip Kumar-starrer Sangdil (1952), composed by Sajjad Hussain, she got reasonable recognition. Consequently, film director Bimal Roy gave her a chance to sing in Parineeta (1953). Raj Kapoor signed her to sing Nanhe Munne Bachche with Mohammed Rafi in Boot Polish (1954), which gained popularity.
O. P. Nayyar gave Asha a break in C.I.D. (1956). She first achieved success in B. R. Chopra's Naya Daur (1957), composed by him. Her duets with Rafi like Maang ke saath tumhara, Saathi haath badhana and Uden jab jab zulfein teri, penned by Sahir Ludhianvi earned her recognition. It was the first time that she had got to sing all the songs for the lead actress. B R Chopra recognized her talent and got her to sing in many of his later films including Waqt, Gumraah, Humraaz, Aadmi Aur Insaan and Dhund. Nayyar's collaboration with Bhosle also produced many hits. Gradually, she established herself and received patronage of composers such as Sachin Dev Burman and Ravi. Bhosle and Nayyar had a professional and personal parting of ways in the 1970s.
In 1966, Asha's performance in the duets from music director R D Burman's first successful movie, Teesri Manzil won popular acclaim. When Asha first listened to the tune of the song Aaja Aaja, she had felt that she would not be able to sing the Western dance number. R D Burman offered to change the music. She was offended a bit and took it as a challenge to sing the song. After rehearsing for 10 days, when she finally sang the song, an impressed R D Burman handed her a 100-rupee note. Aaja Aaja and other songs of the film, O Haseena Zulfonwali and O Mere Sona Re (all three duets with Rafi, another popular Bollywood singer), became rage of the day. Shammi Kapoor, the actor of the movie, once said – "If I did not have Mohammad Rafi to sing for me, I would have got Asha Bhosle to do the job". Asha's collaboration with R D Burman resulted in numerous hits and a marriage. In 1960s and 1970s, she became the voice of Bollywood's dancer, Helen. It is said that Helen would attend her recording sessions so that she could understand the song better and plan dance steps accordingly.Some of the most popular Asha Bhosle-Helen numbers are Piya Tu Ab To Aaja (Caravan), O Haseena Zulfon Wali (Teesri Manzil), and Yeh Mera Dil (Don).
By the 1980s, Asha Bhosle had been stereotyped as a "cabaret singer" and a "pop crooner". In Rekha-starrer Umrao Jaan, she proved her versatility by singing ghazals like Dil cheez kya hai, In aankhon ki masti ke, Ye kya jagah hai doston and Justju jiski thi. The film's music director Khayyam, had lowered her pitch by half a note. Asha herself was surprised that she could sing so differently. The ghazals won her the first National Award of her career. A few years later, she won another National Award for the song Mera Kuchh Saamaan from Ijaazat (1987).
In 1995, the 62-year-old sung for actress Urmila Matondkar in the movie Rangeela. The soundtrack featured songs like Tanha Tanha and Rangeela Re sung by her, and composed by music director A. R. Rahman, who went on to record many more songs with her.
In 2005, 72-year-old Asha's numbers for the Tamil film Chandramukhi and the pop song Lucky Lips for Salman Khan-starrer Lucky were chartbusters. Some of the other popular Tamil songs sung by her are Oh! Butterfly, September Maadham and Vennila Vennila.
In October 2004, The Very Best of Asha Bhosle, The Queen of Bollywood, a compilation album of songs recorded by Bhosle for albums and Bollywood films that were released between 1966 & 2003, was released.
It has been 70 years since Asha Bhosle began singing for movies, but in 2011, she will finally star in her first film "Maaee." The movie will begin filming in April and is scheduled to premiere in June. 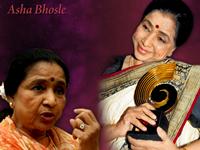 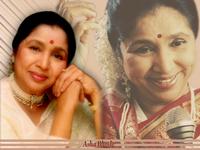 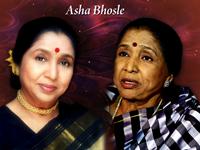