Caralisa did several jingles at start. Her first break came when the acclaimed trio Shankar-Ehsaan-Loy invited her to sing the chorus of the song "Jaane Kyon" from the cult film Dil Chahta Hai in 2001. She has since worked in about 15 albums with various music directors including Vishal-Shekhar and Pritam. She is mainly known for the rendition of the english parts in hindi songs, though she broke the trend with Phir Dekhiye of Rock On!! 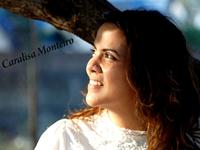