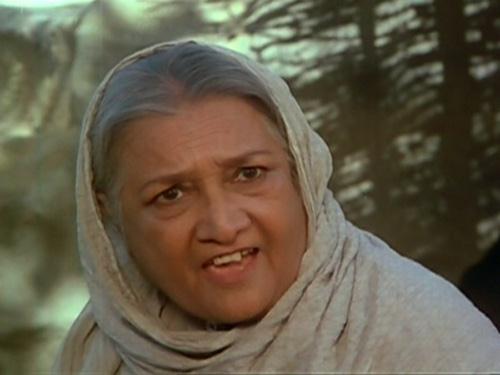 Dina Pathak or Deena Pathak (4 March 1922 – 11 October 2002) was a veteran actor and director of Gujarati theatre and also a film actor. She was also a woman activist and remained the President of the 'National Federation of Indian Women' (NIFW). A doyen of Hindi and Gujarati films as well as theatre, Dina Pathak acted in over 120 films in a career spanning over six decades; her production Mena Gurjari in Bhavai folk theatre style, ran successfully for many years, and is now an part of its repertoire.

She is best known for her memorable roles in the Hindi films Gol Maal and Khubsoorat. She was a favourite of the Art Cinema in India where she essayed powerful roles in films like Koshish, Umrao Jaan, Mirch Masala and Mohan Joshi Hazir Ho!.

Dina Pathak was born Dina Gandhi in 1922 in Bhavnagar, to a Gujarati family from Junagadh. She was enamoured by fashion and films, and while a teenager started acting in plays and won rave reviews from the critics.
At a young age, she joined the Indian National Theatre as an actress. She attended college in Bombay (Mumbai), and became known for her student activism, where Bhavai theatre, a folk theatre form from Gujarat, was used extensively to create awareness about British rule, in the Pre-independence era; this led to her close association with Indian People's Theatre Association (IPTA), along with her elder sister Shanta Gandhi and younger sister Tarla Mehta; while in Mumbai, she had an important hand in reviving the Gujarati theatre there, along with fellow Gujarati actors like Kailash Pandya and Damini Mehta.

She created quite a stir with her plays in Gujarat in the 1940s. The audience queued up to watch her play the lead in Maina Gurjari, which is still one of most popular Bhavai's along with sister Shanta Gandhi's Jasma Odhan.

Although she made her film debut with a Gujarati film, Kariyawar (1948), she retreated back into theatre after acting just one film, only to return nearly two decades later.

Meanwhile she continued playing to packed audience in plays by Indian People's Theatre Association (IPTA) and Shanti Bardhan’s Ballet troupe. Later she formed her own theatre group in Ahmedabad called 'Natmandal', even today, she is remembered as a stalwart performer and a theatre activist at IPTA.

At 44 years of age, she made a comeback into films, with Basu Bhattacharya’s Uski Kahani (1966), for which she won the Bengal Journalists Association Award. She made four films in the 1960s, including Hrishikesh Mukherjee's classic Satyakam (1969), Saat Hindustani (1969), starring Amitabh Bachchan in his debut role and the Merchant Ivory Productions, The Guru (1969).

By the times 1970s, she had become a favourite of Art and commercial films alike, playing powerful motherly and grandmotherly roles. It was in these films that she became recognized as the Grand-Old-Mother of Hindi films.

Films that stand out in this era are Gulzar's Mausam (1975), Kinara (1977), and Kitaab (1977), and sweet comedies like Basu Chatterjee’s Chitchor (1976), Gharaonda (1977), and also in an art cinema classic, Shyam Benegal’s Bhumika (1977), which saw her standing tall along side another acting legend, Smita Patil, in career best performance.

Just as the 1970s ended, she was seen in the comedy classic, Hrishikesh Mukherjee’s Golmaal (1979), where she essayed the role of Kamala Shrivastava, a middle-aged woman who sportingly plays mother to Amol Palekar, who went on to direct her in his 1985 film, Ankahee.

The next decade began with another career best, as a stern disciplinarian matriarch in Hrishikesh Mukherjee’s Khoobsurat in (1980), closely followed by Bhavni Bhavai (1980). In 1980, she was also awarded the Sangeet Natak Akademi Award. During the 80s she also appeared on the popular TV series, Malgudi Days, a Shankar Nag’s TV adaptation of RK Narayan’s eponymous classic. In 1984, she starred in David Lean classic A Passage to India. Though she had far from given career best she gave another powerful performance in Ketan Mehta's Mirch Masala (1985), Govind Nihalani's Tamas (1986) and once again she worked with Gulzar in Ijaazat (1987).

Perhaps her career best came in another comedy, when in 2002 she appeared in Indo-Canadian film, Deepa Mehta’s Bollywood/Hollywood for which she was nominated for Best Performance by an Actress in a Supporting Role at the 23rd Genie Awards.

She completed her last film, Pinjar (2003), but died before its release, due to heart attack, following a prolonged illness, on 11 October 2002 in Bandra, Bombay.

She married Baldev Pathak and had two daughters, Supriya Pathak (b. 1961) and Ratna Pathak (b. 1963), and thus connected with the Kapoor-Pathak-Shah film family.