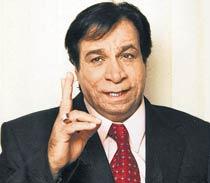 Khan was born in Pishin, Balochistan and was raised in Bombay by his pious father, he was originally a lecturer in M. H. Saboo Siddik Polytechnic and M. H. Saboo Siddik Technical High School, Mumbai. On the annual day function of the college, Khan took part in a play and it was acclaimed by all who were present. Dilip Kumar came to know about it, he called him and showed keenness in watching the play. Khan made special arrangement and acted the play for him and he was so impressed by his acting that he signed him for his next two films Sagina Mahato and Bairaag

He has acted in over 300 films in the Hindi and Urdu language, and has written dialogues for over 100 Indian films, from the 1970s up to the turn of the 21st century. Manmohan Desai paid him a handsome amount of one lakh twenty one thousand for writing dialogues for the film Roti (1974 film). He is most popularly recognized for working with actor Jeetendra, Feroz Khan, Amitabh Bachchan, Govinda and in films by David Dhawan. He has also worked side by side with other comedians like Shakti Kapoor and Johnny Lever. He has played a large variety of parts in films like a supporting role of a father, uncle, brother, main villain or the side villain, guest actor and comedian.

He recently appeared in Mujhse Shaadi Karogi (2004), Lucky: No Time for Love (2006) and Family: Ties of Blood (2006). He had also starred in his own comedy television series titled Hasna Mat, which aired on Star Plus.

There were rumours of him writing a sequel to Andaaz Apna Apna, but when media asked him, he denied it saying "I have not taken any projects as writer, its just a rumor". He made a comeback on Indian television with a comedy series Hi Padosi..Kaun Hain Doshi on Sahara One.

He lives in Mumbai, the home of the Indian film industry. His son Sarfaraz Khan has also acted in some films. He is an alumnus of Ismail Yusuf College, Mumbai. He was earlier (1970–75) teaching in M. H. Saboo Siddik College of Engineering, Byculla, Mumbai as Professor of Civil Engineering.

He won the Filmfare Award for best comedian in 1991 for Baap Numberi Beta Dus Numberi and a Screen Award for best performance in a comic role in 1995 for Taqdeerwala.Khan was recognized by the AFMI (American Federation of Muslims from India) for his achievement and service to the Muslim community in India. 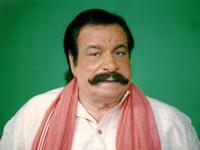