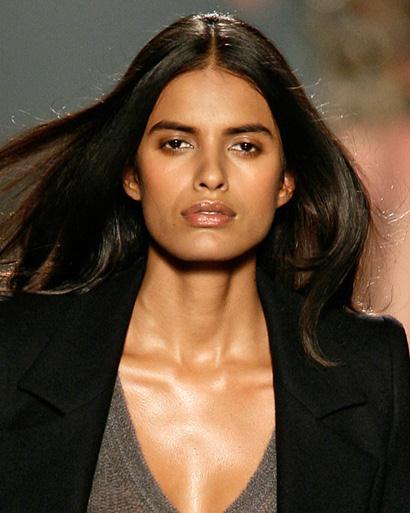 Lakshmi Menon is an Indian model. She took up modelling to earn money while studying for a degree in sociology at the Bangalore University. After modelling in India for several years, she began her international career in 2006.

Menon was featured in French Vogue editorial for the first time in October, 2008, after her Milan show for La Perla, in which she walked for D&G and Givenchy. She has also appeared in editorials for American, Spanish, Indian, and French Vogue, Harper's Bazaar, V Magazine, Dazed & Confused, Indian Elle, and Allure. She won the “This year’s Model” crown awarded by Vogue for 2008. She was also in the Top 10 Newcomers by Style.com and on the cover of Elle the same year.

In December 2008, in "What's Hot For 2009", Lucie Greene of the Daily Mail included Menon as "Hot" and predicted that she would attain supermodel status. Indian photographer Prabuddha Dasgupta says of Menon that “She’s dusky, flawless and the true face of beauty. She’s worked with Jean Paul Gaultier, Hermes, Chanel -- and is the face of the future.” Vogue said in 2008 that she was "quite the embodiment of Givenchy's new-season style".

She is featured in the 2011 Pirelli Calendar nudely photographed by Karl Lagerfeld.