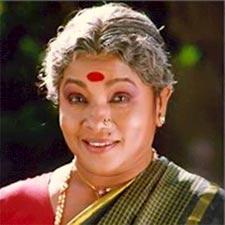 Manoramma is Tamil actress and has acted in more than 1500 films, 1000 stage performances and few television serials. Her birth name was gopishantha. She is affectionately called as Achi. She has Guinness World Record for acting in most number of films in the world.

She started her acting career as a drama artist, which was more popular those days. She slowly migrated from dramas to cinemas just as most actors did those days. During her initial days in the cine field, she concentrated more on comedy. She was given equally challenging roles alongside the well known comedian Nagesh. They made an excellent pair and gave many praiseworthy comedies.

Her role in Thillana Mohanambal was much appreciated and noticed even with the presence of great stalwarts like Sivaji Ganesan and Natiya Peroli (Danseuse) Padmini in the movie. Ever since, she was provided with more scope in varied roles in addition to comedy. She took each responsibility with such an ease which made the Tamil industry recognize her immense talent.