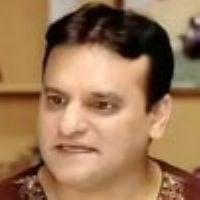 Paresh Ganatra is an Indian television, stage and film actor. In Bollywood films he is most noted for his role in the Bollywood blockbuster No Entry (2005). On television he is most for comedy TV series, Baa Bahoo Aur Baby (2009), and as a participant in reality stand-up comedy series, Comedy Circus 3 Ka Tadka (2009), and Comedy Circus Mahasangram (2010) series, he is again partnered with Bharti Singh and Sharad Kelkar.

Paresh Ganatra was born in a Gujarati household in Mumbai, where was brought up. He did his schooling from Lions Juhu High School in 1982. Thereafter he graduated from Narsee Monjee College of Commerce and Economics in 1986, and joined Management studies at Somaya College, Mumbai.

Having started participating in theatre while in still college, he started his acting career with Gujarati theater in the city from 1984 to 1992. And made his film debut with a role in Mann in 1999. He had acted TV series, Ek Mahal Ho Sapnon Ka, a Colonial Cousins music video, number of TV commercials, including, Symphony Air Coolers, Tata Phones, Coffee Bite, LG TV, Nerolac, Dabur and McDonalds, when his big break came with film Aankhen (2002).

He continued theatre, and mid 1990s acted in a musical comedies, Action Replay, directed by Vipul Shah, and Khelaiya, apart from serious roles in plays like Boman and Eklo Jaane Re.