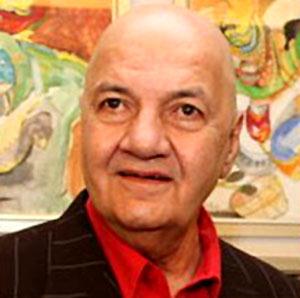 Prem Chopra is an actor in Hindi and Punjabi films. He has acted in over 400 films. He is famous for his soft spoken diction despite being a villain in most films.

Chopra was born to a Hindu Punjabi family in Lahore on 23 September 1935 to Ranbirlal and Rooprani Chopra. He was third of six children. After the partition of India, his family moved to Shimla, where he was brought up. His father desired that Prem be a doctor.

Chopra joined the newspaper The Times of India in Mumbai in the late 1950s. He kept trying to get a break in films, and in 1962 got a Punjabi film Chaudhary Karnail Singh. The film won a National Award and got Prem noticed.

Among his early films he played Sukhdev in Shaheed, one of his rare positive leading roles. After Teesri Manzil and Upkaar, he was flooded with films as a villain. After Upkaar in 1967, he left The Times of India.

He has ever since been a leading villain in Hindi films. The dialogue " Prem naam hai mera, Prem Chopra" (My name is Prem, Prem Chopra) from the film Bobby has been very popular. Another famous Prem Chopra dialogue is "Mai wo bala hoon jo sheshay se pathar ko todtee hai" which closely translates to "I am that trouble which crushes stones with glass".

Of late, he has started taking comic and character roles too. He had a good career spanning 35 years and was popular for villain roles in Bollywood. He is one of the villains in 1970's time.