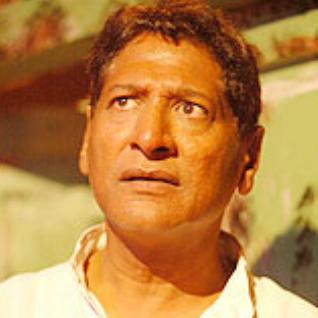 Rajendra Gupta is an Indian film, television and theater actor and director who is best known for his television roles of Pandit Jagarnath in the 1990s Doordarshan fantasy television series Chandrakanta and Sudha's father - Jagat Narayan - in the 1998-2001 Sony TV drama Saaya.

An alumnus of the National School of Drama (1972 batch), Gupta has worked in numerous television serials and films. He played the role of the Mukhiya (village headman) of Champaner in the Oscar-nominated 2001 film Lagaan.

Gupta was born in a business family in Panipat and did his graduation from the Kurukshetra University. His father ran a woolen textiles business but Gupta had no interest in the business; his interests lay, instead, in dramatics and theater. Gupta met wife-to-be, Veena, a Christian, in Indore when he went there to take part in a college play. Since Veena's parents did not agree to their marriage, the couple eloped to Bhopal, got married, and then returned home.

In 1972, Gupta enrolled himself at the New Delhi-based National School of Drama and completed his post graduation in direction. Gupta's daughter, Ravee Gupta, is a television actress.

Gupta and his family moved to Bombay in 1985 and he started working in television serials; three years later he entered films. Gupta has acted in innumerable television serials and films; so much so that in 1990, his name was included in the Limca Book of Records for appearing in the most number of television serials - over 40 of them.

In a 2001 interview with the Times of India, he mentioned that of all the films that he has done, he is proud of his work in Lagaan (2001) and Salim Langde Pe Mat Ro (1989). Since then he has gone on to work in critically acclaimed films such as Amu, Sehar and Guru. In the same interview, he said that among his television roles, his work in the Syed Mirza-Kundan Shah serial Intezaar (as the Senior Station Master), the fantasy series Chandrakanta (as Pandit Jagarnath), and Saaya (as Jagat Narayan) were among his best.

In spite of having played meaty parts in many films and television serials, theater is Gupta's first love - his ultimate destination. He has acted in numerous plays and has directed at least twenty of his own.

Gupta is the actor-director of plays such as Sarphire and Jaheez Hatyare, both based on writer-philosopher Albert Camus’ French play The Just Assassins, and Sooraj Ki Antim Kiran Se Sooraj Ke Pehle Kiran Tak based on Surendra Verma's 1965 Hindi play.

Gupta has acted in many Hindi plays, but Chanakyashastra and Kanyadaan, a play by noted playwright Vijay Tendulkar, are two plays he did in English. Rajendra Gupta and noted actress Neena Gupta run a theater production company - Sahaj Productions.