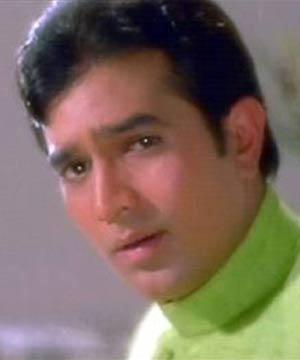 Rajesh Khanna (born Jatin Khanna on 29 December 1942) is an Indian actor of from Hindi films, and has been Hindi film producer and an Indian politician.

During his career, he appeared in over 160 films of which 96 had him as the solo hero and 17 were two hero projects. He won three Filmfare Best Actor Awards and was nominated for the same fourteen times. He received the maximum BFJA Awards for Best Actor (Hindi) - four times and nominated 25 times. He was awarded the Filmfare Lifetime Achievement Award in 2005. Khanna is referred to as the “First Superstar” of Hindi cinema. He made his debut in 1966 with Aakhri Khat and rose to prominence with his performances in films like Raaz, Baharon Ke Sapne, Ittefaq and Aradhana.

Khanna was born in Amritsar on 29 December 1942. He was adopted and raised by foster parents who were relatives of his biological parents. Khanna lived in Thakurdwar near Girgaon. Khanna attended St. Sebastian’s Goan High School in Girgaum, along with his friend Ravi Kapoor, who later took the stage name Jeetendra. Their mothers were friends. Khanna gradually started taking interest in theatre and did a lot of plays in his school and college days and won many prizes in the inter college drama competitions. Khanna became a rare newcomer who struggled in his own MG sports car to get work in theatre and films in the early sixties. Both friends later studied in Kishinchand Chellaram College(KC). When Jeetendra went for his first film audition, it was Khanna who tutored him. Khanna's uncle changed Khanna's first name to Rajesh when Khanna decided to join films. His friends and his wife call him Kaka.