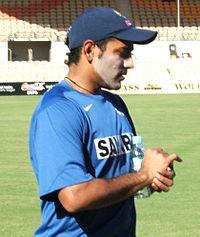 He played an important role in India's win at the ICC World T20 World Cup 2007. Uthappa first came to the public's attention when he made 66 for India B against India A in the Challenger Trophy in 2005. He was selected in the 15-member squad of the Indian Cricket team for the 2007 Cricket World Cup held in the West Indies in March April 2007. In the sixth ODI of the NatWest Series 2007-2008, he scored a sensational 47 of 33 balls to take India to a thrilling victory, keeping Indian hopes alive in the 7 match series that they were trailing 2-3 before the match. After Dhoni got out in the 47th over with the Indian score at 294, Uthappa kept a cool head to take India to the target with two balls to spare in a remarkable victory. Uthappa also scored a crucial 50 against Pakistan in the 20-20 World Cup in South Africa, when India were tottering at 39/4. With this, he became the first Indian to score a 50 in a 20-20 International match.