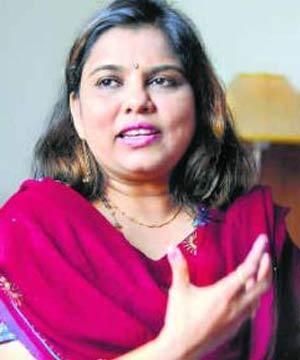 Sadhana Sargam is an acclaimed Indian playback singer. She is a recipient of the prestigious National Film Award and Filmfare Awards.

Sargam has sung in many Indian languages for films, television serials and music albums. She is well known for her 90s Hindi songs and recent South Indian songs. She is the only Indian playback singer who has sung in more than 24 regional languages. She also holds a record for being the only North Indian to have won the National Award for a South Indian song. She is also a trained Hindustani classical singer. She has ventured into the southern Carnatic classical style with ease.

Sadhana Sargam is of Maharashtrian origin. She was trained in Indian classical music by her mother, Neelatai Ghanekar, at an early age, and then by Pandit Jasraj. Her mother introduced her to a composer by the name of Anil Mohile, which later resulted in her involvement with the children's choir. In 1982, she released her first single for the film Vidhaata.

Sadhana Sargam is popular in singing Hindi as well as Tamil songs. Her most critically acclaimed songs were in the film Water, composed by A. R. Rahman, in which she sang three songs: "Aayo Re Sakhi", "Piya Ho" and "Naina Neer". Her other notable songs in Hindi with the same composer include "Aahista Aahista" from Swades, "Chupke Se" and "Naina Milaike" from Saathiya, "Chanda Re" from Sapney, "O Palanhare" from Lagaan, "Jhulaa Bahon Ka" from Doli Saja Ke Rakhna, and "Banno Rani" from 1947: Earth. Her other notable rhapsodic hits in Hindi are "Neele Neele Ambar Par" from Kalakaar, "Jab Koi Baat Bigad Jaye" from Jurm, "Pehla Nasha" from Jo Jeeta Wohi Sikandar, "Na Kajre Ki Dhar" from Mohra, "Aashiqui Me" from Dil Ka Kya Kasoor, "Tere Dar Pe Sanam" from Phir Teri Kahani Yaad Aayee, "Jhinimini" from Maqbool and "Aao Na" from Kyun! Ho Gaya Na....

She won the National Film Award for Best Female Playback Singer for the song "Pattu Solli" from Thankar Bachan's cult classic movie Azhagi; the music was by maestro Ilaiyaraaja, whom she has praised for "giving her such a wonderful song, and making her eligible for the National Award".

She has sung more than 150 songs in Tamil alone and has many top songs. One of her recent songs is "Marali Mareyaagi" from Savari, a Kannada movie for which she received the Filmfare Best Playback Kannada Female Singer award in 2009. Her most famous songs in Tamil include "Snehithane" from Alaipayuthey, "Mukundha Mukundha" from Dasavathaaram, "Konjum Mainakkale" from Kandukondain Kandukondain and "Swasame" from Thenali. She also sang "Om Zaarare" from Kuselan, along with Daler Mehndi and K. S. Chithra. She sang several songs in Hindi and Oriya for music director Kajol-Saroj. She has also sung the Tamil version of "Mann Mohana" from the Hindi film Jodhaa Akbar. Another notable recent solo Tamil song is "Sutri Varum Bhoomi" from the Vidhyasagar-composed Jeyamkondaan and "En Nenjil" from Baana Kaathadi. The recent Ilaiyaraaja-composed Tamil film Naan Kadavul had a song titled "Amma Un Pillai" featuring her voice. Her popular tracks in Marathi include "Onjalit Majhya" and "Saanjh Jhali Tari" from Sarivar Sari, "Dis Char Jhale Mann" and "Dhag Datun Yetat" from Aaishappath, "Pahile Paul", "Jhali Punha Pravahi" and "Ye Saad Jivnachi" from Sakhi. Her recent Marathi album Tu Sukhkarta..Tu Dukhraya was released by Pandit Hridaynath Mangeshkar on the occasion of Shri Ganesh Chaturthi on 3 September 2010 at Ravindra Natya Mandir, Mumbai. The songs were composed by Amol Bawdekar and lyrics were written by Mahesh Ghatpande.

Sadhana Sargam has been very well received in Tamil Nadu films. She is very busy in the Tamil music field. She was first introduced to Tamil songs by acclaimed music director Vidyasagar in the film Coimbatore Mappillai. Among all the Bollywood singers (male/female), Sargam has sung the most number of songs in Tamil. 132 songs of Sargam were listed as of August 2008.

In an interview in May 2007 while touring in the USA, the most celebrated composer of the Indian music industry, A. R. Rahman, complimented Sadhana Sargam, calling her the only Indian singer who could surpass his expectations in her renditions of songs.