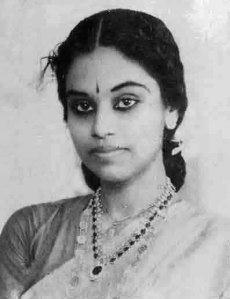 Shantha P. Nair was a playback singer in Malayalam cinema.

She was working in All India Radio in calicut before entering playback singing.She entered Malayalam films industry through Thiramala in (1953),her first song 'Ammathan thankakudame' (by music director Vimal Kumar) was a lullaby.

She was equally proficient in Carnatic music and held many concerts, which she used to end with light music. And once in the absence of Salil Chowdhury, she composed a tune for Ramu Kariat. Salilda after hearing it insisted that it be retained without changes in the final release. The song was Makkathu poi varum maanathe. She also did the chorus for Salilda later in the Chemmeen songs.Her last song was in 1961 for V Chidambaranath’s film Murapennu Kadavathu thoni aduthapol along with S. Janaki.Shanta Nair won the Sangeet Natak Academy award in1987.