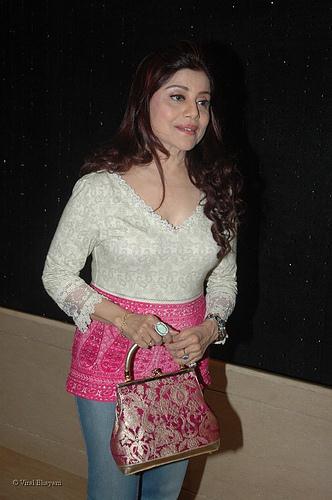 Sapna Mukherjee is a Bollywood playback singer who won the Filmfare Award for Best Female Playback Singer for the chartbuster hit "Tirchi Topi Wale" in Tridev (1989).

She has since sang for most of the leading ladies of the time including Sridevi, Sushmita Sen, Rekha and many others. She was introduced in Bollywood by Kalyanji Anandji in Feroz Khan's magnum opus Jaan baaz (1986) where she sang "Ek To Kam Zindagani Pyar Do Pyar Lo" picturised on the ravishing Rekha.

Despite being well trained in classical singing and having the potential, she could not scale great heights like her contemporaries Alka Yagnik and Kavita Krishnamurthy. Yet she's still remembered for the naughtiness and spunk in her voice specially for the cult song "Tirchi Topi Wale" from 1989 movie Tridev.