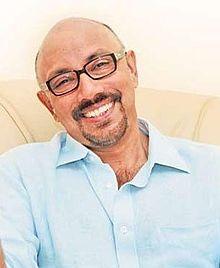 Sathyaraj is an Indian film actor and media personality in Chennai, Tamil Nadu, India. A Tamil activist and a political influence, he has acted in over 150 films, ranging from action and drama to comedy. In 2007, he played the role of Periyar E. V. Ramasamy in the Tamil Nadu government-sponsored film Periyar. As of 2007, he has produced one film, which was Lee, starring his son Sibiraj. He has also directed a movie Villadhi Villain starring himself in three different roles which also starred actress Nagma.

Sathyaraj completed his primary school education in Tamil at St Mary's Convent, Coimbatore. He completed the equivalent of the tenth standard in a suburban high school, Ramnagar, Coimbatore. He joined the Government Arts College, Coimbatore and completed a Bachelor of Science degree in botany. Tamil actor/director Manivannan was a co-student in PUC (Class 12 Junior college), and the two began a friendship while there.

Sathyaraj entered the film industry after witnessing the shooting of the film Annakili, where he met actor Sivakumar and producer Thiruppur Manian. He joined the drama troupe of Komal Swamynathan. Sathyaraj's first film was Kodugal Illaatha Kolangal, where he had an uncredited role. Later he worked as production manager for the film Kannan Oru Kaikkuzhanthai. In addition to his managerial role, he also had a small acting part in the film. He acted in around 75 films from 1978 to the mid-1980s most of which sfeatured him in negative roles.

His first full-fledged leading role came through the film kadalora Kavithaigal (1986). Of late he has been doing supporting roles in Tamil films.