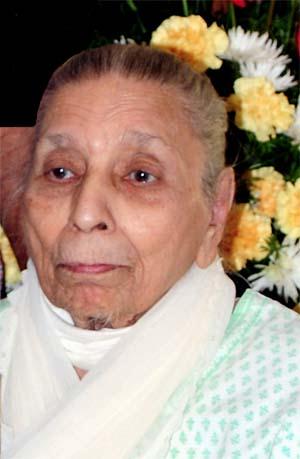 Shamshad Begum is an Indian singer who was one of the first playback singers in the Hindi film industry. She was a big fan of K.L. Saigal and watched Devdas 14 times. She earned 15 rupees per song and was awarded 5,000 on the completion of the contract on Xenophone, a renowned music recording company.

Sometime back, a controversy erupted in the media, when several publications gave the false news of her death, before it was clarified that the Shamshad Begum who died in 1998 was Saira Banu's (Dilip Kumar's wife) grandmother with the same name. The singer has been living with her daughter Usha Ratra and son-in-law in Mumbai, ever since her husband Ganpat Lal Batto died in 1955.[2] Recently, she celebrated her 89th birthday at her elder sister's house and now she stays at - Hiranandani Gardens, Powai, Mumbai She was conferred the Padma Bhushan in 2009.