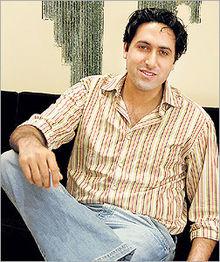 Sachdev was born and brought up in Delhi. He is the middle child of three children, he has an older sister Soniya,and a younger brother Sandeep who was the winner of the Indian Biggest Loser Jeetega. Sachdev is an architect by profession. Sachdev is five days older of his former classmate, Smriti Irani, who played his on-screen mother on Kyunki Saas Bhi Kabhi Bahu Thi.

Sachdev made his acting debut in Aamir Reza Hussain's tribute to Kargil war heroes, The Fifty Days War. He later auditioned for the role of Sahil Virani in the show Kyunki Saas Bhi Kabhi Bahu Thi but was not selected. He was later called back for the another role in the same serial, Gautam Virani. Sachdev gained popularity and recognition for his role as Gomzy and made a prominent position for himself in the Indian television fraternity. Sachdev played a negative character for the first time as Rohit in another Balaji serial Kya Haadsa Kya Haqeeqat.

He was finalized to play a negative character for the second time as Swayam in the serial Kahiin To Hoga but resigned due to back problems. Sachdev played the lead male role of Kabir Khan in the first Muslim orientated television serial Khwaish, his character was killed off after only a few months but Sachdev was brought back in another role. In November 2009, Sachdev made a comeback in TV after a year's break in another Balaji serial, Pyaar Ka Bandhan as Ronak. Moreover, Sachdev has been casted as Rudr in the Balaji serial Bandini (Bandini (TV series)).

Sachdev considers himself an introvert and shy. He prefers to stay home and attempts to do one crossword a day. Sachdev has previously dated Ashlesha Sawant, Kiran Dubey and Riva Bubber. All of whom were once his co-stars on the serial Kyunki Saas Bhi Kabhi Bahu Thi. Sachdev married Amrita Gujral, the head of International Media Marketing at The Times of India on December 9, 2007. The wedding took place in Gujral's home town of Chandigarh, India.