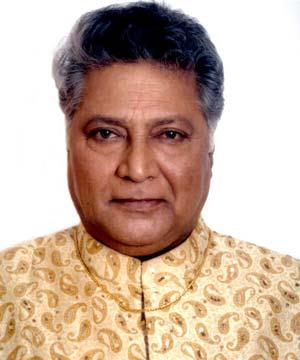 Vikram Gokhale (occasionally credited as Vikram Gokhle) is an well known Indian film, television and stage actor, notable for his roles in Marathi theatre and Hindi films and television. He is the son of another well known veteran Marathi theater and film actor Chandrakant Gokhale, who acted in 68 Marathi and 16 Hindi films besides 64 Marathi plays and several Marathi TV serials over a span of 75 years.

Gokhale is now directing his debut directorial film titled Aaghaat. Produced by Sprint Arts Creation and executive producer Rajesh Damble, the film is based on a story written by Dr Nitin Lavangare. The cast of the film includes actors Mukta Barve and Dr Amol Kolhe and is shot in Pune. The film is getting released on 24 December 2010.

Vikram Gokhale has a long family lineage active in Indian film industry. His great grandmother Durgabai Kamat was the first female artiste of the Indian screen, while his grandmother Kamlabai Gokhale (Kamlabai Kamat at that time) was the first female child artiste of Indian cinema. Way back in 1913, Durgabai acted as Parvati and Kamlabai as Mohini in a film by name Mohini Bhasmasur, produced and directed by Dadasaheb Phalke, the father of Indian cinema. His father Chandrakant Gokhale was a veteran Marathi film and stage artist and has acted in over 70 Marathi and Hindi films. He also runs a real estate firm, Sujata Farms in Pune.

He is also an active social worker. His family has founded an organization about 23 years ago, which provides financial support for disabled soldiers, unaffected kids of leper parents, education of orphan children among other initiatives.