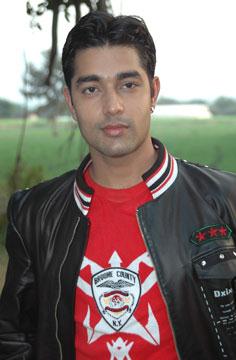 Vikrant Rai is an Indian actor. He starred in the Indian TV serials"[(Kkavyanjali)]"which aired on Star Plus and Maayka and Ghar Ki Lakshmi Betiyaan which both aired on Zee TV.

'Vikrant Rai' is a popular young face in Indian television. The extremely goodlooking and talented actor Vikrant Rai used to essay the role of Kshitij in "Ghar ki lakshmi..Betiyaan" & Jeet in "Maayka". Vikrant Rai gained his popularity, especially among the coquettish young dames, as they found him matching to their wavelengths.

His unbound energy onscreen matched ditto with them. Dribbling with his career in the small screen with Maayka & Ghar Ki Lakshmi Betiyaan, Vikrant made an indelible imprint among the viewers , before leaving it all to pursue his film career. Vikrant Rai first came to prominence as a supporting cast member in the mega budget TV series Kkavyanjali(2005-06) on "Star Plus" produced under Balaji production house run by Indian soap queen 'Ekta Kapoor'.