She was discovered by Raj Kapoor, who introduced her in his 1973 movie Bobby. She was sixteen at the time. She married actor Rajesh Khanna at the age of 16, and left the film industry to raise her children.

After Kapadia's separation, she returned to the film industry in 1984. In 1985, she appeared in the film Saagar, where she once again appeared opposite her Bobby co-star, Rishi Kapoor. The film was known for being quite controversial for several scenes featuring Kapadia, including one scene in which she was seen in a brief topless scene. Kapadia's performance as Mona D'Silva, a young woman residing in Goa, who is torn between her friend and the man she loves, won her a second Best Actress award at the Filmfare Awards. Rediff.com noted about her performance, "Dimple, caught between a friend and lover, performed solidly and memorably, grounding the two male leads and making the film work."

Kapadia appeared in many movies throughout the 1980s and 1990s. In 1993, she won the National Film Award for Best Actress for her performance in Rudaali. She played an alcoholic in Dil Chahta Hai (2001). In 2005, she once again starred with Rishi Kapoor in Pyaar Mein Twist. In 2006, she appeared in her first English-language film Being Cyrus. Kapadia's more recent work includes Luck By Chance (2009). 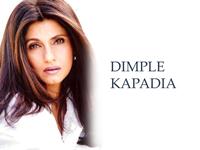