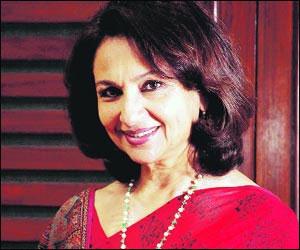 Sharmila Tagore (born 8 December 1946) is an Indian film actress. She has won National Film Awards and Filmfare Awards for her performances.
She has led the Indian Film Censor Board from October 2004 till March 2011 . In December 2005 she was chosen as an UNICEF Goodwill Ambassador.

Sharmila was born in a Hindu Bengali family in Hyderabad, Andhra Pradesh, India to Gitindranath Tagore who was then Dy. General Manager of the British India Company owner of Elgin Mills. She attended St. John's Diocesan Girls' Higher Secondary School and Loreto Convent Asansol. She is the great-grandniece of noted poet Rabindranath Tagore.

Sharmila began her career as an actress in Satyajit Ray's 1959 Bengali film Apur Sansar (The World of Apu), as the ill-fated bride of the title character. As noted on the official website for Ray, "She was just a fourteen-year-old then, with no previous acting experience. As the shooting began, Ray had to shout instructions to Sharmila during the takes. None of this, however, is reflected on the screen. Ray cast her in his next film Devi too." She appeared in a number of Ray films, often co-starring with Soumitra Chatterjee.

She established herself as a popular Hindi film actress with Shakti Samanta's Kashmir Ki Kali in 1964. Samanta again cast her in many more hit films, notably An Evening in Paris (1967), the first appearance in a bikini of an Indian actress, (Sadhana had appeared in one-piece bathing suit in earlier films) which not only shocked conservative Indian audiences but also set off a wave of bikini-clad actresses carried forward by Parveen Babi (in Yeh Nazdeekiyan, 1982), Zeenat Aman (in Heera Panna, 1973; Qurbani, 1980) and Dimple Kapadia (in Bobby, 1973[10]), but established Tagore's role as somewhat of a sex symbol in Bollywood.

Wearing a bikini put her name in the Indian press as one of Bollywood's ten hottest actresses of all time, and was a transgression of female identity through a reversal of the state of modesty, which functions as a signifier of femininity in Bombay films. But, when Tagore was the chairperson of the Central Board of Film Certification, she expressed concerns about the rise of the bikini in Indian films.

Samanta later teamed up Tagore with Rajesh Khanna for movies such as Aradhana (1969) and Amar Prem (1972). Other directors paired them together in Daag (1973), Maalik (1972) and Safar (1970). She starred in Gulzar's 1975 film, Mausam and won the National Film Award for Best Actress. She also played a supporting role as heroine Sarita Choudhury's mother in Mira Nair's 1991 film Mississippi Masala.

Her latest release is a Marathi film Samaantar by Amol Palekar. Her earlier releases were Vidhu Vinod Chopra's Eklavya: The Royal Guard, which brought together real life mother and son, Sharmila Tagore and Saif Ali Khan. They shared screen space for the first time since Aashiq Awara (1993). 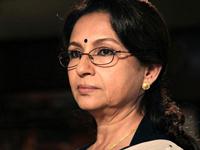 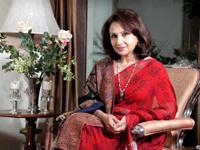