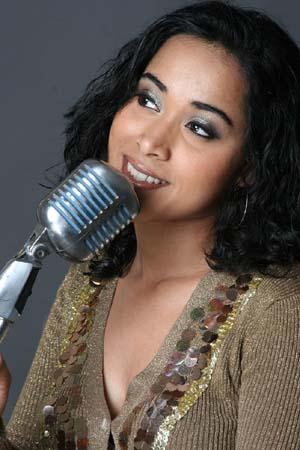 Shweta Subram is Dubai-born Indo-Canadian singer, songwriter and performer based in Toronto, Canada. She primarily sings in English, Hindi, Malayalam, Tamil and Kannada, but has also sung in Arabic and French.

Shweta has an active participant in the International Indian Film Academy Awards. She headlined the IIFA Buzz festival in Markham,_Ontario and performed with Bollywood music composer/director duo Salim-Sulaiman for IIFA Rocks 2011 in Toronto.

The IIFA Rocks segment was aired globally by STAR_(India) to a total audience of 700 million. Shweta sang the song Khuda Ke Liye from the film Aazaan.

Shweta gained popularity after winning the North American Best Singer award from Sangam Kala Group—the prominent non-commercial group engaged in promoting Indian cultural and the group responsible for discovering talents such as Sonu Nigam, Sunidhi Chauhan and Anand Raj Anand. In India, she shot to fame after being part of the singing reality TV show Sunsilk Gang of Girls based on success of Spice Girls.

The show was featured on Zoom TV and the band of girls toured through India performing at various events and concerts. The TV show showed the behind the scenes drama through rehearsals and after performances.

Shweta's Carnatic and Hindustani music guru's are veterans in the music industry including Padma Wadkar (wife of Suresh Wadkar) and Sunil Paigankar (also trained Shruti Pathak, Nikita Nigam). It is reported that Shweta is working on her album with UK producer Parichay and Indian-Pakistani band Josh.[10] She has often been said to have resemblance to Sunidhi Chauhan's voice.