Sreesanth (born February 6, 1983 in Kothamangalam, Kerala, India), is an Indian cricketer. Sreesanth initially was a leg-spinner in his childhood, modelling his action on India's leading Test wicket-taker Anil Kumble, who was to become his Test captain.

Following in the footsteps of fellow Kerala fast bowler Tinu Yohannan, who earned selection to the National Cricket Academy in 2000, Sreesanth was selected for the MRF Pace foundation in Chennai. He then made his first-class debut against Goa in the 2002-03 domestic season, claiming 22 wickets in seven matches in the Ranji Trophy and winning selection for South Zone in the Duleep Trophy squad in the same season.

In November 2004, Sreesanth entered the record books when he took a hat-trick against Himachal Pradesh in a Ranji trophy game, the first time it was achieved by a Kerala bowler, earning him the nickname The Prince of hat-tricks amongst Keralites. ODI career Sreesanth was given the new ball in the first ODI against Sri Lanka in Nagpur. After being punished early by Kumar Sangakkara and Sanath Jayasuriya, Sreesanth returned to claim his first two ODI wickets at the end of the match.

He was retained in the squad but did not play in the 5 match series against South Africa, but played all five matches in the tour to Pakistan, recording a haul of 4/58 in the fifth ODI against Pakistani cricket team in Karachi. Sreesanth was selected for his first Test squad in the home series against England in March 2006, in place of Zaheer Khan. Sreesanth's most significant performance to date in Test cricket was his role in the 1st Test of India's 2006 tour to South Africa at Johannesburg. After losing the limited-overs series 4-0, Sreesanth produced took 5-40 in a display of pace and swing to help dismiss South Africa. 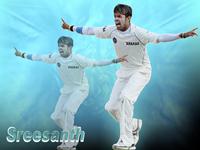