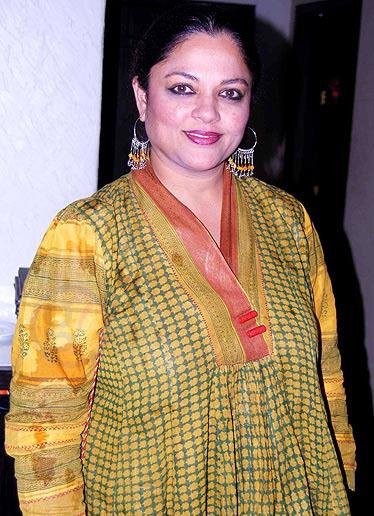 Tanvi Azmi is an Indian film and television actress.Her maiden name before marriage was Saunhita Kher. She is the daughter of famous Marathi-Hindi actress Usha Kiran and Dr. Manohar Kher. She did her SSC from The Bai Avabai Petit Girls High School Bandra, Mumbai.

Tanvi is married to Baba Azmi cinematographer and brother of Shabana Azmi, thus connected with the Akhtar-Azmi film family.

Azmi met with success over her portrayal of a troubled doctor in the tele-series, Jeevanrekha (Lifeline). She has also acted in television. Tanvi has acted in number of Marathi and Hindi films and Marathi tele serials. She first appeared in a young widow in telefilm Rao Saheb (1986) directed by Vijaya Mehta.

She also acted opposite Mammootty, in Malayalam film Vidheyan (The Servile, 1993), directed by Adoor Gopalakrishnan.

She received a nomination for Filmfare Award for Best Supporting Actress for her role in film Akele Hum Akele Tum (1995).