Despite early hiccups, Rajasthan Royals (RR) managed a competitive 165/6 against the Mumbai Indians (MI) after choosing to bat in the second IPL Qualifier at the Eden Gardens in Kolkata on Friday. Captain Rahul Dravid, who top-scored with 43, looked in a hurry to score fearing a Duckworth-Lewis situation after evening rains threatened to disrupt the match. He confidently drove Mitchell Johnson through the covers and got three boundaries in the Australian’s first two overs. 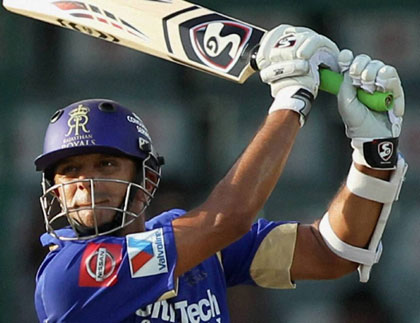 RR openers Dravid and Ajinkya Rahane looked in good touch and promised a lot before Harbhajan Singh provided the breakthrough by castling the latter for 21 in the seventh over. In his next over, Harbhajan removed Shane Watson, with Rohit Sharma pulling off a catch at square leg. Rajasthan’s middle-order was exposed after Sanju Samson fell for a second-ball duck off Lasith Malinga. Stuart Binny tried to accelerate after Dravid fell when the score was 87 in the 13th over.

However, Binny, after a cameo of 27 fell in the 16th over along with Kevon Cooper. It was the only over sent down by Kieron Pollard and left Royals precariously placed at 108/6. However, Brad Hodge, and wicketkeeper Dishant Yagnik stepped up the tempo, sharing an unbroken 57 for the seventh wicket, scoring those runs off the last 4.3 overs. Though Hodge struggled with his timing, Yagnik looked in supreme touch. The left-handed Yagnik scored an unbeaten 31 off just 17 balls with five fours while Hodge was unconquered on 19.

Harbhajan was Mumbai Indians’s best bowler with figures of 3/23, while Pollard finished with 2/6. Lasith Malinga, most feared at the death, was a bit off-colour. He conceded 18 runs in the innings’ last over. It became a comic sight when ball slipped off his hand  twice and went wide beyond imagination.