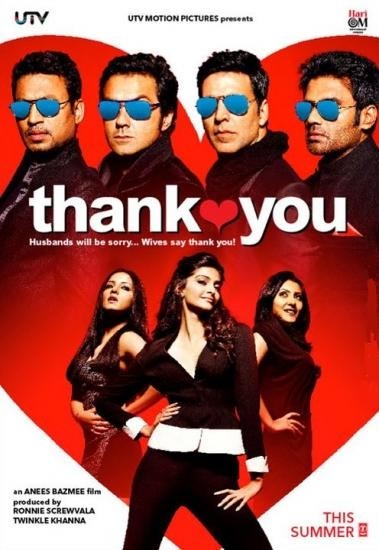 Thank You Preview
Synopsis – Thank You is about three married men trying to have some fun outside their marriage. Akshay Kumar plays a detective who specializes in extra-marital relationships. Some scenes in this film were shot in Vancouver and Toronto, Canada and Bangkok.The film, which has been co-produced by UTV Motion Pictures and also sees Irrfan Khan, Celina Jaitley and Rimi Sen in pivotal roles, outlines the story of three married friends (played by Deol, Shetty and Khan), who want to spice up their humdrum lives by embarking on extramarital affairs. Kumar is playing a marriage counsellor, while the three leading ladies play the suffering wives. Other Bollywood films which have been focused around a similar concept are Masti, No Entry, and Shaadi No. 1.