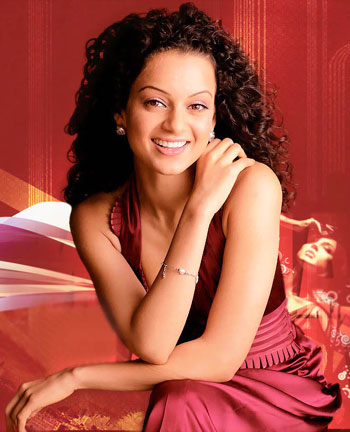 Kangana Ranaut Syas: My part in ‘Game’ is reviving: After the hit romantic comedy ‘Tanu Weds Manu’, Kangana Ranaut plays a cop in just-released ‘Game’. The actress, who says she makes an effort to do selective work, will be seen in light-hearted roles in three forthcoming films. Kangana’s three forthcoming releases are ‘Rascals’, ‘Double Dhamaal’ and ‘Happy New Year’.

‘I love comedy, but you cannot continue doing the same kind of roles. As an actor it’s important to grow, for your own interest or for your audiences’ interest. It gets monotonous. I prefer to do things like ‘Tanu weds Manu’; at the same time I loved doing ‘Fashion’. They are all very very different from each other,’ Kangana told IANS. ‘I make an effort to do selective work,’ she added.

Asked whether she was offered the item song that Mallika Sherawat is doing in ‘Double Dhamaal’, she said: ‘No, the song was not offered to me. I am generally not interested in doing item numbers.’

‘I don’t think I have any reservations or limitation. I havn’t come across any so far in my career. There wasn’t anything that I have been incapable of doing or where I found my parameters very narrow. There hasn’t been any incident like that,’ Kangana, whose recent release ‘Tanu Weds Manu’ turned out to be a hit.

She jumped on the Bollywood bandwagon with critically acclaimed and commercially successful crime-based romantic saga ‘Gangster – A Love Story’, which was directed by Anurag Basu.

After ‘Gangster’, she mostly played tragic roles. Her next release was ‘Woh Lamhe’ (2006), which was filmmaker Mahesh Bhatt’s final goodbye to former girlfriend Parveen Babi. In the film, Kangana brilliantly portrayed the late actress’ madness and despair.

In ‘Life In A… Metro’ (2007), a film about big city people coping with emotional and psychological trauma, Basu presented her as a call centre executive who is in a relationship with her married boss.

With Bhandarkar’s ‘Fashion’, a dark tale about the fashion industry, she hit bull’s eye. Her performance as an ex-ramp queen won her a national award. She moved to lighter roles with ‘Kites’ and ‘Tanu Weds Manu’. ‘Game’, she says, has given her ample chance to exploit her potential.

‘I play a cop and it is a very intense performance in terms of body language, speech. It gave me ample amount of chance to exploit my potential. It’s very refreshing and not something that you guys have seen before on Indian screen,’ said Kangana, 24. The actress, who started working at the age of 17, has no regrets.

‘Every life has its own charm, like my life has its own charm. My friends are doing post- graduation, a few are getting married. Their lives might seem charming to me at some point of time, but they find my life very charming. It’s important to be happy in our place. I don’t miss the fun element of college life,’ she said.