Aditya Chopra's "Dhoom" franchise gets bigger each year with bigger stars. Names of Salman Khan, Hrithik Roshan and Amitabh Bachchan emerged for the fourth installment of "Dhoom" series – "Dhoom 4". And if grapevine is to be believed, then it is "Baahubali" star Prabhas who has beaten all the superstars of Bollywood to grab the "Dhoom 4" deal. Reports suggest that Prabhas, who played the protagonist in "Baahubali", will make his grand Bollywood debut with "Dhoom 4". "A while ago, film-maker Aditya Chopra, director Vijay Krishna Acharya and other members of Aditya's production house had asked for a special screening of Baahubali. It was while watching the film that they thought of casting Prabhas. The Dhoom franchise is such where the villain, who is the hero, is supposed to be strong and brawny. 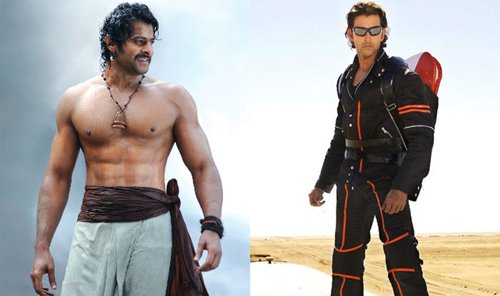 Prabhas fits the requirements perfectly. Moreover, the dubbed version of Baahubali, too, got a tremendous box-office response, thus proving that he has a pan-India appeal," Hindustan Times quoted an insider as saying. In addition, the fourth installment will also feature Hrithik Roshan. However, he will be seen in a cameo role. "The makers will soon make an announcement, once they've finalised the details," the insider added. Earlier, director Vijay Krishna Acharya and an official from Yash Raj Films were asked about Hrithik playing the antagonist in "Dhoom 4", and both has said that there will be an official announcement regarding it and hence people will have to wait. "We'll be announcing the film in a few weeks. Will keep you posted and will be able to give you a clear picture then," Vijay told Press Trust of India. "Wait for YRF to make the official announcements on forthcoming films and in the meantime please refrain from casting speculations," the agency quoted YRF official as saying.