Famous Indian cricketer  Yuvraj Singh on Wednesday has got engaged to Bollywood actress Hazel Keech in Bali, India. According to details, few days ago it was reported that Yuvi gave hint about his marriage on microblogging site Twitter during a conversation with Harbhajan Singh. Hazel Keech is a former Bigg Boss contestant. She played the role of Kareena Kapoor’s best friend and Salman Khan’s wife in ‘Bodyguard’. Yuvraj and Hazel attended Harbhajan and UK-born Bollywood actress Geeta Basra’s reception in Delhi and attracted a lot of shutterbugs. 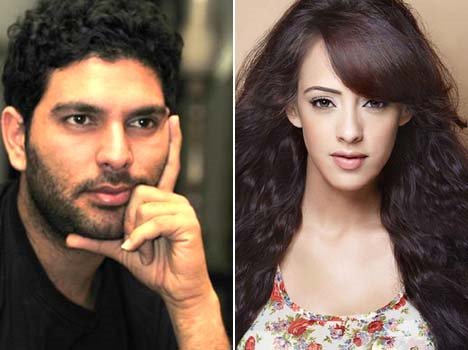 There were rumours going around the corner.Both Yuvraj and Hazel were dating each other since a long time and the two had kept their relationship status under wraps to avoid unwanted attention. Yograj, father of Yuvraj, who was introduced to Hazel by Yuvraj, said that he is really impressed by his son’s choice and feelt that he will definitely make a comeback to the national team. He further added that “I was introduced to her by Yuvraj and she is a very nice girl. I am confident that marrying her will change his fortunes and he will return to the national squad. He definitely has it in him to represent India. It is sad how Mahendra Singh Dhoni spoilt his international career. The same had happened to me when my friend Kapil Dev had destroyed my India career,”